You will struggle to find any reference to this poll in the Western MSM. It's findings are emphatically NOT in accordance with "The Official Narrative" and thus, in spite of its authoritative nature, its findings are obfuscated, minimised or simply ignored.

The results of opinion polls conducted in six Arab states in July 2010 by Zogby International. It measures opinion on a range of subjects. It is produced each year in conjunction with the University of Maryland, the Brookings Institute and Zogby International.

Conducted by the University of Maryland
in conjunction with Zogby International

With special thanks to the Carnegie Corporation of New York 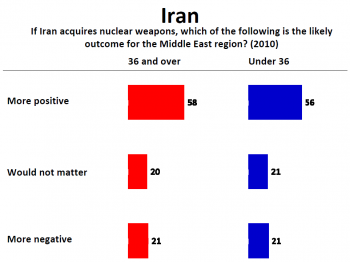 Among the key poll findings are:

Among the most striking findings on the question of attitudes toward President Obama: Early in the Obama administration, in April and May 2009, 51% of the respondents in the six countries expressed optimism about American policy in the Middle East. In the 2010 poll, only 16% were hopeful, while a majority - 63% - was discouraged. 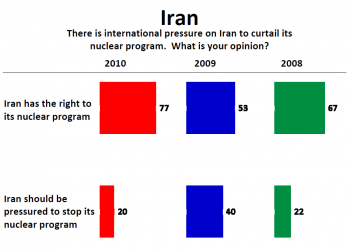 On Iran's potential nuclear weapons status, results show another dramatic shift in public opinion. While the results vary from country to country, the weighted average across the six countries is telling: in 2009, only 29% of those polled said that Iran's acquisition of nuclear weapons would be "positive" for the Middle East; in 2010, 57% of those polled indicate that such an outcome would be "positive" for the Middle East.