Ursula Maria Kuczynski, also known as Ursula Kuczinski, Werner, Ursula Beurton and Ursula Hamburger, was a German author and spy for the Soviet Union. A daughter of Robert René Kuczynski, she joined the Communist party at an early age. After her family moved to the United States in 1928, Kuczynski became a spy for the GRU. Code-named "Sonja", she married Rudolf Hamburger, another GRU agent, and moved to China, where she operated a spy ring under the direction of Richard Sorge.

After undergoing formal training in Moscow in 1934, she was active in Manchuria in 1935, then moved to London before going to Switzerland in 1939, where she collaborated with the Lucy spy ring. She divorced later that same year, and remarried with Len Beurton shortly afterwards. In 1941 she moved to Britain and continued her activities for the GRU for most of the decade. Following the arrest of physicist Klaus Fuchs in late 1949, Kuczynski fled to East Berlin, where she retired from the GRU in 1950.

After her resignation, she worked for the East German government for a decade, then began a new career as an author. Her writings include her autobiography, Sonja's report but also several children's books.

She was awarded the Order of the Red Banner twice in recognition to her services to the Soviet Union, in 1937 and 1969. 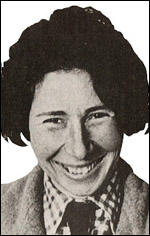 +
Display lifespan
15 May 1907 - 7 July 2000 +
Has bilderbergCount
0 +
Has birthPlace
Rg +, (Berlin) +  and Germany +
Has cercleCount
0 +
Has child
Maik Hamburger +, Janina Hamburger +  and Peter John Beurton +
Has deathPlace
Berlin +  and Germany +
Has fullPageName
Ursula Kuczynski +
Has fullPageNamee
Ursula_Kuczynski +
Has image