U.S. Police are officially responsible for preserving law and order in US, preventing crimes. Every year, US police spend millions on mass surveillance tools for cellphones, but as of 2017 there were still few rules about what happens to the information they capture.[1] 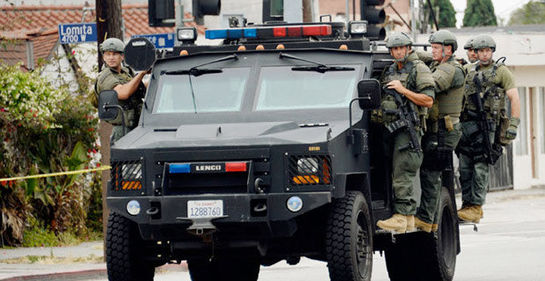 US police are increasingly using surplus military equipment. In 2015, North Dakota became the first use state to allow police use of drones armed with less than lethal weapons such as tasers, rubber bullets and tear gas after a last-minute push by a lobbyist.[2]

An invention of the LAPD, SWAT teams (Special Weapons And Tactics) are increasingly used by US police, mostly to raid private homes as part of the "war on drugs". Live streaming head cameras have lead to 'swatting' as a prank,[7][8] sometimes with fatal consequences.[9]

In 2019 US police have been instructed to protect local aesthetics by arresting people who sleep in cars.[10]