Phil Gormley QPM was appointed in December 2015 by the Scottish Police Authority (SPA) to succeed Sir Stephen House as Chief Constable of Police Scotland, and took up the post on 5 January 2016.[1]

On his first full day as Chief Constable, Gormley was reported to be in conflict with First Minister Nicola Sturgeon over the issue of routinely arming the Scottish Police.[2]

On 7 February 2018, Phil Gormley announced his resignation as Police Scotland's Chief Constable. According to Bella Caledonia:

"We don’t know whether it was to do with the publication of the Strategic Review of Undercover Policing in Scotland (SRUPS) or the catalogue of other complaints against him. Or if it was to do with the announcement that there will or won’t be a public inquiry into undercover policing in Scotland, in line with the investigation in England, expected this afternoon. But we do now that spycops were active in Scotland and the Scottish police played no small part. We do know that the officer who oversaw the National Public Order Intelligence Unit (NPOIU) from 2005 to 2007 was the Chief Constable of Scotland: Phil Gormley."[3]

Gormley studied at the University of Gloucestershire, graduating in 1984. He later undertook postgraduate study at Cambridge University.[4]

In 1985, Gormley began his policing career as a constable with Thames Valley Police.[5] In 1999, he was promoted to superintendent and appointed commander with responsibility for the South Oxfordshire area.[6] In 2003, he joined the Metropolitan Police and was appointed Commander of Specialist Operations branch. In 2005, he organised the merger of the Anti-Terrorist branch and Special Branch into what would become the Counter Terrorism Command in 2006.[7]

In the 2013 New Year Honours, Gormely was awarded the Queen's Police Medal (QPM) in recognition of his service as Chief Constable of Norfolk Police.[15]

This page imported content from Wikipedia on 24 February 2016.
Wikipedia is not affiliated with Wikispooks.   Original page source here
Retrieved from "https://wikispooks.com/w/index.php?title=Phil_Gormley&oldid=139722"
Categories:
... more about "Phil Gormley"
RDF feed
Has image 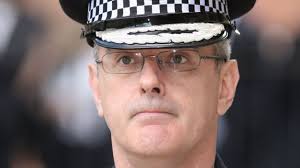