Patreon is a company that manages payments to content providers, often in the terms of monthly subscriptions. In late 2020 started removing providers that did not follow official narratives.

On 18 December 2020, The European Union-funded[1] nominally independent EU DisinfoLab released a study questioning «whether Patreon's efforts to tackle disinformation prioritized English-language content over that of other languages. The study «identified at least 17 Spanish accounts that monetize and spread QAnon content and other conspiracy theories.»[2][3]

Besides Patreon's "failure to remove all accounts that directly reference QAnon", the study pointed to "a number of other accounts that monetize other conspiracies like COVID-19 denialism or unfounded theories about 5G that indirectly interweave QAnon ideas into their narratives."

"These examples illustrate that the measures implemented by Patreon are not fully enforced and still leave room for the circulation of QAnon theories on the platform," wrote the author also stating that «the problem of disinformation goes far beyond QAnon and argues that more action is needed against the spread and monetization of dangerous conspiracy theories on Patreon.

These are just some examples of a widespread censorship particularly of COVID-19 dissidents and resistance.

In December 2021, Patreon 'suspended' OffGuardian for "repeated use unfounded or debunked theories to argue against broadly supported public health measures on COVID-19". The site, a prominent leftist COVID-dissident, might be able to get Patreon back if it removes "any and all content that advances COVID-19 medical misinformation."[4]

On February 19th, 2021, Patreon closed the account of KenFM[5], the largest non-corporate media in Germany.

In February 2021 Patreon cancelled the account of the German group Demokratischer Widerstand (Democratic Resistance) with a spurious explanation.[6][7] The group publishes a weekly newspaper since April 2020 with left leaning critique of the government Covid-19 measures.[8] Mainstream media reporting in Germany targeted them from the earliest moment on.[9][10]

In February 2021, Patreon declared it is going to deplatform "Geopolitics & Empire", an independent news and analysis radio show. 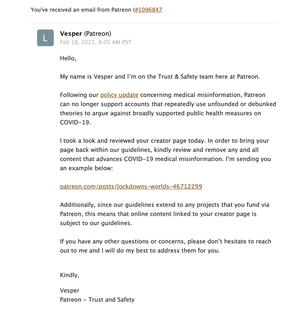 In February 2021, Patreon stated they would imminently close The Last American Vagabond[12], one of the best sites for Covid-19 news and analysis, unless all "Covid-19 medical misinformation" was removed. Whitney Webb, who is a writer for that website, gets her Patreon account censored in March since her reports might dissuade her audience from taking preventative measures to fight COVID-19.[13][14][15]

In October 2020 , Patreon announced that it would be taking action against accounts who use its platform to actively spread QAnon’s beliefs, «a growing threat».“QAnon-dedicated creators that are identified by our Policy and Trust & Safety teams will have their accounts removed from Patreon.”[16][17]

Customers «who have spread some QAnon ideas but “are not dedicated to spreading QAnon content” would also be given the opportunity to recant and «bring their accounts into compliance, according to the company.» 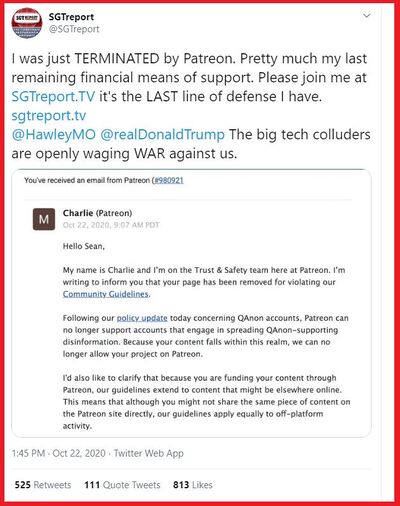 One or two people on Wikispooks have Patreon pages, semantically represented by the property:Has patreon: