Difference between revisions of "Norman Finkelstein"

Norman Finkelstein, an American Jewish scholar, is one of the world’s leading experts on the Israeli–Palestinian conflict and the political legacy of the Nazi holocaust in which, apart from his parents, every member of Finkelstein’s family, on both sides, was exterminated.

Finkelstein's 2000 book The Holocaust Industry, which was serialised in The Guardian, became an international best-seller and touched off a firestorm of debate. His subsequent book, Beyond Chutzpah: On the Misuse of Anti-Semitism and the Abuse of History argued that Israel uses perceived anti-Semitism as a weapon to stifle criticism.[1]

In September 2007, after a highly publicised feud between Finkelstein and an academic opponent, Alan Dershowitz, Finkelstein resigned his professorship at DePaul University, Chicago.[2] In his resignation statement, Finkelstein said that he believes the tenure decision was "tainted" by external pressures, but praised the university's "honourable role of providing a scholarly haven for me the past six years."

"I felt finally I had gotten what was my due and that maybe it was time, for everybody's sake, that I move on," he said at a news conference that followed a morning rally staged by students and faculty who carried signs and chanted "stop the witch hunt." Finkelstein said "DePaul students rose to dazzling spiritual heights in my defence that should be the envy of and an example for every university in the United States."

Finkelstein would not discuss financial terms of the resignation agreement, which he said was confidential, but noted that it does not bar him from speaking out about issues that concern him, including "the unfairness of the tenure process."

"I'm happy he's out of academia. Let him do his ranting on street corners."[3]

In May 2008, Finkelstein was deported and banned from entering Israel for 10 years. The Israeli security service Shin Bet interrogated him for around 24 hours about his contact with the Lebanese Islamic militia, Hezbollah, when he travelled to Lebanon earlier in the year and expressed solidarity with the group which waged war against Israel in 2006. He was also accused of having contact with al-Qaeda. But Finkelstein rejected the accusations, saying he had travelled to Israel to visit an old friend:

"I did my best to provide absolutely candid and comprehensive answers to all the questions put to me," he told an Israeli newspaper in an email exchange.
"I am confident that I have nothing to hide. Apart from my political views, and the supporting scholarship, there isn't much more to say for myself: alas, no suicide missions or secret rendezvous with terrorist organisations. I've always supported a two-state solution based on the 1967 borders. I'm not an enemy of Israel."[4]

A Document by Norman Finkelstein 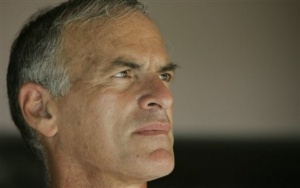