Difference between revisions of "Nina Jankowicz" 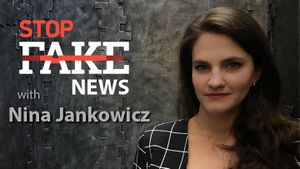 She was picked to head a US Department of Homeland Security internet censorship project in 2022, which faced stiff opposition, who pointed out her evidently fauly track record and distinguishing truth from lies.[1]

Helen Buyniski commented on the occurrence of her appointment on Telegram:

“why has the zombie entity known as the Biden administration chosen this moment to foist upon us the cartoonishly evil-looking compulsive blinker Nina Jankowicz as Minister of Truth, even allowing her to openly speculate about allowing her favorite coterie of blue-checks to edit your tweets if they are found wanting in a Kafkaesque star-chamber proceeding, Wikipedia-style?

quite simply, because the establishment cannot get its threadbare narratives in front of your face any other way. no one is watching CNN anymore, or reading the New York Times. the former's ratings are largely gleaned from airports, bank lobbies, hospital waiting rooms, and the like, while the latter's subscription numbers consist of largely the bedridden elderly (i should know, i used to deliver 'replacement' papers when a subscriber missed their daily dose of warmongering, and 9 times out of 10 it would be a smiling nurse in scrubs who answered the door, or a note included in the delivery info to "leave by door - recipient elderly"). despite their best efforts at censorship, people are deserting their platforms (especially Facebook) when their favorite follows are deplatformed rather than embrace the establishment narratives instead.

thus the narrative managers have no choice but to rudely shove Nina Jankowicz and her excessive blinking and hand-fluttering in your face. without such a crudely un-self-aware creature as she at the helm, any attempts to build a Ministry of Truth from the ashes of the US government's credibility would dry up and blow away.”
Helen Buyniski (17 May 2022)  [3]

Jankowicz drafted her resignation letter on May 17, 2022, the day after DHS decided that the board would be shut down, and officially resigned the following day.