Natasha Osben stood as the Labour Party candidate for Clacton in the UK/2017 General Election on June 8th.[1]

Rigged for the Rich

The system is rigged for the rich. And when we say 'the rich' we don't mean middle income earners, nor are we referring to those in the top 5% who earn more than £80,000 and will be taxed a little more under Labour, we mean the super-rich: the top 1% who the Conservatives have given tax breaks to totalling billions of pounds that could have been going into the economy.

While they have hacked away at our NHS, imposed a pay cap on public sector workers and made budget cuts that have made us all worse off, Theresa May and her government are taking money from hard-working tax payers and putting it in the pocket of millionaires.

Think about it, and in June, vote for the party that will make us ALL richer. Vote for the PEOPLE, not the powerful. Topple this rigged establishment: Vote Labour.[6]

On 2 May 2017, Tasha Osben addressed the members of Clacton Constituency Labour Party:

"I am delighted to let you know that I have been selected as our parliamentary candidate.

"I have written the following statement for the papers and I promise each and every one of you that I will work tirelessly on my election campaign over the coming month. Those of you who I do not know well, I really look forward to getting to know better as I represent you as your parliamentary candidate for Clacton and as we work together to get a Labour government back in parliament, and those of you I know well, I look forward to working even more closely with over the next few weeks.

“The Clacton constituency is my home; I grew up in St Osyth and now I live in Weeley and have three children who all go to school in the area. I am very proud to represent Labour in this general election.

"I have watched with shock and dismay as the cuts brought in by this Conservative government have had a direct and catastrophic impact on our local health and social care services and our emergency services, which are now drastically underfunded and understaffed. These cuts are unsafe and place our residents at risk. Today Labour pledged to put 10,000 more police officers on the streets, which will be funded by a reversal of the capital gains tax. I am proud to stand for a party, which is serious about putting public services first and reversing the damaging budget cuts that have been overseen in recent years by our Tory-led council and Conservative government.

"Conservative budget cuts are also having a direct impact on our schools, and this is not sustainable. Our children deserve a quality education that will ensure good access to opportunities and prospects for their futures. I am proud to be standing as Labour’s parliamentary candidate so that I can make this pledge to you: If I am elected as your MP for Clacton, as part of a Labour government, I will ensure that our schools are properly funded and that no children are left behind. Currently our children are having their futures stolen by a government who have cut the funding needed to ensure that schools meet our expectations for standards and are adequately staffed so that students can fulfil their potential. Labour must, and will, put a stop to this shameful policy of taking from the next generation to fix the current problems with our economy brought about by increasing privatisation and cuts that this Conservative government have brought in that has seen our National Debt more than triple to levels that far exceed any amount of borrowing or debt that this country has ever seen under any Labour Government.

"The Conservatives promised to fix our economy, to protect our NHS and to look after hard working members of society. They have failed on all fronts, having tripled national debt, brought our NHS to its knees and forced hundreds of thousands of working families into poverty, and millions of people to the food banks. This is a shameful mark on our recent history. Now we have an opportunity to hold the Tory government to account for this failure and call them out on their lies and broken promises. I therefore urge you to vote for me to be your MP in June, and cast your vote for the benefit of all, not just for the privileged few.

"I have been inspired by the unity and hard work I have seen from our members over the campaign for the County Council Elections this Thursday. Now let's continue to work together in an endeavour we can all really get behind; to kick the Tories out of Parliament!

"All the very best, Tasha." 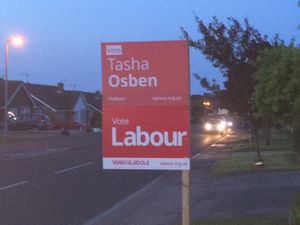 Over the 20/21 May 2017 weekend, Tasha Osben addressed a letter individually to thousands of postal voters which was hand-delivered by scores of Clacton CLP members:

"This is an important election. I read the Conservative manifesto today and it is deeply troubling. The Tories will hit pensioners hard - the Triple Lock on pensions will go along with universal winter fuel payments. Children will be affected as well with plans to end free school meals for infants. From cradle to grave the Tories are threatening to make us all worse off. Bizarrely, they are still trying to bring back foxhunting, despite this being opposed by the vast majority of the public.

"The government have their priorities wrong. They have chosen to cut inheritance tax for the wealthiest and are taking away the inheritance of the working classes by seizing the property of our elderly to pay for social care. The Conservatives have chosen to cut corporation tax and are planning to finance their giveaway to the rich by taking from the hard-working tax-payer and from the elderly who have worked all their lives for a decent retirement. It does not have to be like this. There is another way.

"As we leave the EU, the Tories have the wrong vision for our future. However, Labour are offering an alternative future where we may all be better off. Labour will put money back into our NHS and bring it back into public ownership. Labour will guarantee no tax increases for 95% of the population and will guarantee the Triple Lock for pensioners, as well as protecting the universal winter fuel allowance and bus passes. Labour will fund our schools and invest in our education, development of skills, and the creation of industry and jobs in our area. Labour will bring back grants for higher education and bursaries for student nurses and midwives. Labour will reverse the 1% pay cap and increase the minimum wage. Only by investing in our future can we build an economy that will deliver for all.

"There is plenty to be done in our area. Elect me on June 8th to be your voice in Parliament and stand up for the changes we need to see in our constituency."

Not a career politician

One of my most frequently asked questions is, "why haven't I heard of you before now?". The answer is simple: I am not a career politician.

When I have fed homeless people, donated to food banks, campaigned against the closure of our maternity and Minor Injuries services, attended CCG meetings to oppose cuts to our healthcare services, been fundraising for mental health charities (clearly set up long before the General Election was ever called), volunteering with a confidential listening and advice charity etc, I've not taken a selfie and posted it on social media to get credit for it.

I am aware people want to know their candidates though so that is why I am holding an open office hour every single week-day for people to have the chance to come and get to know me. I am in the Clacton CLP office (52 Meredith Road CO15 3AG) Monday to Friday, 9am to 10am, all are welcome to come along and ask any questions you may have.

For a bit of background, I grew up here, went to St Osyth Primary School and 1st St Osyth Scouts, I had my children at Colchester Hospital, I studied politics at the University of Essex and I've lived in the area my whole life - now living in Weeley, which is in the Clacton constituency.

I am standing because I'm sick of seeing our country run into the ground, our NHS destroyed, and hard-working people like you and me struggling to make ends meet. I've had enough of suits who talk the talk but are only in it to serve themselves. We need a change. We need more ordinary hard-working members of society in politics to represent workers and families; people who actually care.

My chances of getting elected with Labour in Clacton might not be great, but I've got to try. I love my country and I can't just sit by and watch the Tories destroy the economy and our public services and force more and more hard-working people into poverty.[7]