Malaysia Airlines Flight 370 was a scheduled flight on 8 March 2014 which apparently disappeared without trace. Peter Myers, who was actively researching its fate as of February 2017, has suggested that MH370 hijacked by CIA, to stop technology transfer to China.[1]

Wikipedia reports that Malaysia Airlines Flight 370 (MH370/MAS370)[2], also marketed as China Southern Airlines Flight 748 (CZ748) through a codeshare.[2] was a scheduled international passenger flight that disappeared on Saturday, 8 March 2014, while flying from Kuala Lumpur International Airport, Malaysia to Beijing Capital International Airport, China. Flight 370 reportedly last made voice contact with air traffic control at 01:19 Malaysian Time (17:19 UTC, 7 March) when it was over the South China Sea, less than an hour after takeoff, and the aircraft disappeared from air traffic controllers' radar screens at 01:21 MYT (17:21 UTC).[3][4] Commercially-controlled media reports radar data that showed the plane climbing to around 45,000 feet and then making a rapid dive to 23,000 feet.[5]

Emirates CEO Tim Clark said he believed MH370 was hijacked, that the plane may not have flown south, and that Government agencies were covering up.[7]

James Perloff suggested in 2017 that the aircraft's climb to 45,000 feet may have been a way of killing of the passengers once the cabin was depressurized.[8]

A December 23, 2014 article from the New Zealand Herald reported that Marc Dugain, the former chief executive of now defunct Proteus Airlines stated that MH370 was "shot down near a US military base on the remote island of Diego Garcia in the Indian Ocean after it was hacked". Dugain, now a successful novelist, also told a radio station he was warned not to investigate MH370 by an intelligence agency source, who spoke of "risks" and counseled him to "let time do its work".[9]

30 July 2015 - reports that a metallic object described as six to nine feet long and three feet wide was found on a beach on the east coast of Reunion, a French island in the Indian Ocean. The object had the code number “BB670” on it. Locals said the object had shells on it and appeared to have been in the water for some time. [10] 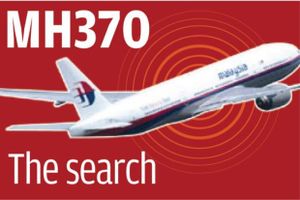