Difference between revisions of "Jacques Attali"

“The real bourgeoisie running the world is about 1,000 people. They are running capitalism." He reconsiders: "Well, one might say it's 10,000, but no more than that. In a world population of 6.5 billion, that is not very many people”
Jacques Attali [1]

“A major pandemic would raise awareness of the need for altruism, at least self-interested. History teaches us that humanity only evolves significantly when it is truly afraid: then it first sets up defense mechanisms; sometimes intolerable (scapegoats and totalitarianisms); sometimes futile (distraction); sometimes effective (therapeutic, if necessary setting aside all previous moral principles). Then, once the crisis has passed, it transforms these mechanisms to make them compatible with individual freedom and to include them in a democratic health policy. The beginning of the pandemic could trigger one of these structuring fears.”
Jacques Attali (3 May 2009)  [2]

Jacques Attali is a French deep politician, economic and social theorist, futurist writer, political adviser and senior civil servant. He was counselor and gray eminence[3][4] to President François Mitterrand from 1981 to 1991, where he advised "economic rigour and replaced the French economic model with neoliberalism, and was the first head of the European Bank for Reconstruction and Development 1991-1993. He attended the 1975 Bilderberg. He has been using the Covid-19-crisis for vocally pushing a total digital remake of the French and world economy, and a vaccine for everyone in the world[5]. 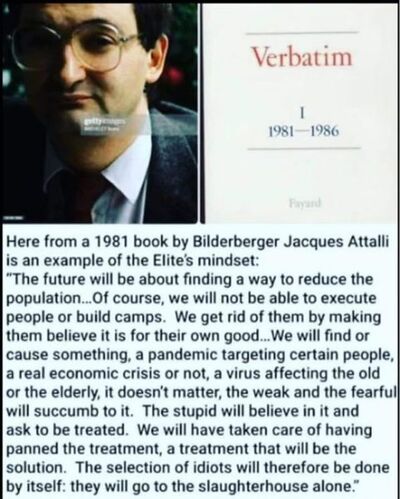 Politically, albeit formally a socialist, he has championed neoliberalism. Since his earliest books, Attali foresaw signals of the future, albeit weak at the time, that later came true. To which degree Attali, as a guru for the establishment, helped make these prophecies true, is hard to measure.

In La parole et l'outil (1976), he announced and described the shift from an energy-based society to an information-based society. In Bruits, in 1977, he announced what would later be the internet, YouTube, and the importance of musical practice; in La nouvelle économie française, in 1978, he discussed the coming emergence of the personal computer, hyper-surveillance and self-surveillance. In Les trois mondes, in 1980, he announced the shift of the centre of power around the Pacific. In L'ordre Cannibale, in 1980, he announced the advent of a prosthetic society, now known as transhumanism. In Histoires du temps, he announced the rapid pace of history and the growing immediacy of relationships. In Amours, he announced the emergence of poly-romantic relationships. In Au propre et au figuré, he announced the break-up of property and its use, and subsequently he invented the concept of the "nomadic object." In Lignes d'horizons, in 1990, he predicted the relative decline of US power. In Brève histoire de l'avenir, he announced a corporate power grab by health data and insurance companies. In L'homme nomade, he described the great movement of populations whose sedentary life was only a temporary stage.

Jacques Attali was born on 1 November 1943 in Algiers (French Algeria), with his twin brother Bernard Attali, in a Jewish family. In 1956, two years after the beginning of the Algerian independence war (1954–1962), his father decided to move to Paris with his family. Jacques and Bernard studied at the Lycée Janson-de-Sailly, in the posh 16th arrondissement, where they met Jean-Louis Bianco and Laurent Fabius. In 1966, Jacques graduated from the École polytechnique (first of the class of 1963). He also graduated from the École des mines, Sciences Po and the École nationale d'administration (third of the class of 1970).

In 1968, while doing an internship at the prefecture of a French department (Nièvre), he met for the second time with François Mitterrand, then President of the department, whom he had met for the first time three years before.

In 1972, Jacques Attali received a Ph.D. in economics from University Paris Dauphine, for a thesis written under the supervision of Alain Cotta. Michel Serres was among the jury of his Ph.D.

Attali taught economics from 1968 to 1985 at the Paris Dauphine University, at the École polytechnique and at the École des Ponts et chaussées.

Jacques Attali's close collaboration with François Mitterrand started in December 1973. His directed his political campaign for the presidential elections in 1974. He then became his main chief of staff in the opposition. In 1981, François Mitterrand, after he was elected President, named Attali as his special adviser. From this moment on, Jacques Attali wrote notes every evening for the attention of the French President, which dealt with economics, culture, politics, or the last book he read. He also attended all the Cabinet meetings, the Defense Council, and all bilateral meetings between President François Mitterrand and foreign heads of States and governments. The President also entrusted him with the role of "sherpa" (personal representative of a head of State) for the European and G7 summits. A CIA document from 1984 detailed that: "one constant at the Elysee is the strong influence of Jaques Attali who remains personally very close to the president"[6].

Attali then enlarged his circle of acquaintances to Raymond Barre, Jacques Delors, Philippe Séguin, Jean-Luc Lagardère, Antoine Riboud, Michel Serres and Coluche. He advised the President to get Jean-Louis Bianco, Alain Boublil and several young, promising graduates from the École nationale d’administration (like François Hollande and Ségolène Royal) to join his team.

In August 1989, Jacques Attali gave up politics and left the Elysée Palace. He founded the European Bank for Reconstruction and Development (EBRD), in London, and became its first president. He resigned from the EBRD's top post in 1993 amid charges of lavish spending[7] and mismanagement.

In 2008 and 2010, he was asked by then President Nicolas Sarkozy to chair a bipartisan commission aiming at proposing reforms to "foster French economic growth", in reality to introduce more neoliberalism. The commission was composed of 42 members, freely appointed by Attali, and the ideas were adopted by Emmanuel Macron, then Minister of Economy, for his "Macron Law".

In 1980 he founded Action Contre la Faim.[8], together with Bernard-Henri Lévy and other intellectuals.

In 1998, he founded Positive Planet, a microfinance organisation. In 2001, French police raided Attali's home, focusing on a payment of 1.5m francs ($213,000) payment from businessman Pierre Falcone to a consulting company belonging to Attali, in connection with an arms deal with Angola. Attali claimed the money was part of a microfinance deal[9].

In 2012, Attali became a member of the supervisory board of Kepler Capital Markets, a Swiss broker based in Geneva.[10]

He also presides over the supervisory board of Slate.fr.[11]

He has published over 75 books, translated into over 30 languages.

In 2009 he made a suggestion that the then current pandemic could be used to establish wider control over the human population, including unified global taxation and a global police force.[12]

Attali wrote in the letter to L'Express:[13]