Many financial institutions (including Goldman Sachs, Bear Stearns & Lehman Brothers) that had been responsible for precipitating the crisis were labeled as "too big to fail" by Treasury Secretary Henry Paulson[2] and were provided emergency funding in the billions of dollars by American tax payers via the Emergency Economic Stabilization Act of 2008.

The "too big to fail" dogma was known to investment bankers and deep politicians before they cashed in on the concept [4]. In fact 2B2F was used to blackmail governments worldwide, because a meltdown of financial institutions would result in a global disaster. Coldblooded gambling with this racket is known as Moral hazard in financial theory. 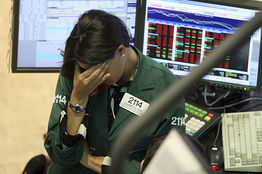 The event is considered to have been caused primarily by the foreclosure of thousands of subprime mortgage loans due the aggressive predatory lending strategies of many financial institutions, including the government backed institutions Fannie Mae and Freddie Mac. This was coupled with the wide scale deregulation of so-called "derivative" financial instruments that were used by companies such as JP Morgan Chase to "bet" against the potential failure of mortgage assets that they deemed "likely to fail".[5][6] However, it must be pointed out, given the structure of the mortgages and lending practice, that it was almost a certainty from the beginning that wide-scale inability to pay will set in at some point (the question of intent arises).

At the peak of the crisis, from November to December of 2008, Bilderberger Robert Rubin pocketed $126 million in cash and stock options during his one month tenure at Citigroup as CEO. [7]

Iceland was the only country that showed its bankers that malice will be legally pursued. [8]