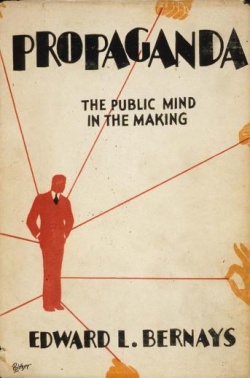 The conscious and intelligent manipulation of the organized habits and opinions of the masses is an important element in democratic society. Those who manipulate this unseen mechanism of society constitute an invisible government which is the true ruling power of our country.

We are governed, our minds are molded, our tastes formed, our ideas suggested, largely by men we have never heard of. This is a logical result of the way in which our democratic society is organized. Vast numbers of human beings must cooperate in this manner if they are to live together as a smoothly functioning society. Our invisible governors are, in many cases, unaware of the identity of their fellow members in the inner cabinet.

They govern us by their qualities of natural leadership, their ability to supply needed ideas and by their key position in the social structure. Whatever attitude one chooses to take toward this condition, it remains a fact that in almost every act of our daily lives, whether in the sphere of politics or business, in our social conduct or our ethical thinking, we are dominated by the relatively small number of persons — a trifling fraction of our hundred and twenty million — who understand the mental processes and social patterns of the masses. It is they who pull the wires which control the public mind, who harness old social forces and contrive new ways to bind and guide the world.

It is not usually realized how necessary these invisible governors are to the orderly functioning of our group life. In theory, every citizen may vote for whom he pleases. Our Constitution does not envisage political parties as part of the mechanism of government, and its framers seem not to have pictured to themselves the existence in our national politics of anything like the modern political machine. But the American voters soon found that without organization and direction their individual votes, cast, perhaps, for dozens or hundreds of candidates, would produce nothing but confusion. Invisible government, in the shape of rudimentary political parties, arose almost overnight. Ever since then we have agreed, for the sake of simplicity and practicality, that party machines should narrow down the field of choice to two candidates, or at most three or four.

In theory, every citizen makes up his mind on public questions and matters of private conduct. In practice, if all men had to study for themselves the abstruse economic, political, and ethical data involved in every question, they would find it impossible to come to a conclusion about anything. We have voluntarily agreed to let an invisible government sift the data and high-spot the outstanding issues so that our field of choice shall be narrowed to practical proportions. From our leaders and the media they use to reach the public, we accept the evidence and the demarcation of issues bearing upon public questions; from some ethical teacher, be it a minister, a favorite essayist, or merely prevailing opinion, we accept a standardized code of social conduct to which we conform most of the time.

In theory, everybody buys the best and cheapest commodities offered him on the market. In practice, if every one went around pricing, and chemically testing before purchasing, the dozens of soaps or fabrics or brands of bread which are for sale, economic life would become hopelessly jammed. To avoid such confusion, society consents to have its choice narrowed to ideas and objects brought to its attention through propaganda of all kinds. There is consequently a vast and continuous effort going on to capture our minds in the interest of some policy or commodity or idea.