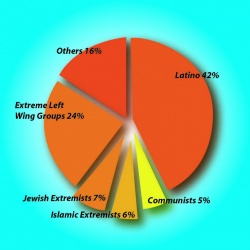 Image right: Pie-chart illustrating the sources of US terrorist attacks between 1980 and 2005

Since the mid-1980s, the FBI has published Terrorism in the United States, an unclassified annual report summarizing terrorist activities in this country. While this publication provided an overview of the terrorist threat in the United States and its territories, its limited scope proved inadequate for conveying either the breadth or width of the terrorist threat facing U.S. interests or the scale of the FBI’s response to terrorism worldwide. To better reflect the nature of the threat and the international scope of our response, the FBI expanded the focus of its annual terrorism report in the 2000/2001 edition to include discussion of FBI investigations overseas and renamed the series Terrorism.

This second edition of Terrorism provides an overview of the terrorist incidents and preventions designated by the FBI as having taken place in the United States and its territories during the years 2002 through 2005 and that are matters of public record. This publication does not include those incidents which the Bureau classifies under criminal rather than terrorism investigations. In addition, the report discusses major FBI investigations overseas and identifies significant events—including legislative actions, prosecutorial updates, and program developments—relevant to U.S. counterterrorism efforts. The report concludes with an “In Focus” article summarizing the history of the FBI’s counterterrorism program.

While the discussion of international terrorism provides a more complete overview of FBI terrorism investigations into acts involving U.S. interests around the world, Terrorism is not intended as a comprehensive annual review of worldwide terrorist activity. The chronological incidents, charts, and figures included in Terrorism 2002-2005 reflect only those incidents identified in the Terrorism/Terrorism in the United States series. For more complete listings of worldwide terrorist incidents, see the Worldwide Incidents Tracking System maintained by the National Counterterrorism Center at www.nctc.gov and the Terrorism Knowledge Base compiled by the Memorial Institute for the Prevention of Terrorism at www.tkb.org.

The FBI hopes you will find Terrorism 2002-2005 to be a helpful resource and thanks you for your interest in the FBI’s Counterterrorism Program. A full-text and graphics version of this issue, as well as recent back issues of Terrorism and Terrorism in the United States, are available for on-line reference on the FBI home page at www.fbi.gov.