Difference between revisions of "FBI/Corruption"

From Wikispooks
< FBI
Jump to navigation Jump to search

FBI corruption has a long history, going back to its first director, the notorious blackmailer, J. Edgar Hoover. The most prominent examples in the 21st century include its repeated involvement in incidents of "terrorism".[1]

The first head of the FBI, J. Edgar Hoover, held the post for over 3 decades, while his deputy Clyde Tolson was also his suspected homosexual lover.[2] Hoover used the FBI to gather information for purposes of blackmail, in so doing, turning it into an important part of the US deep state. The FBI appears to have been involved in the JFK assassination and to have played a major role in the assassination of MLK. 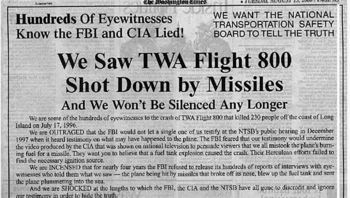 Witnesses who claimed to have seen a bright flash streak upwards to the plane just before the explosion were not allowed to testify.[3]

TWA Flight 800 exploded some minutes out of New York airport. Over 250 witnesses reported seeing a streak of light suggestive of a missile just prior to the explosion.[4][5][6] Suspecting foul play, the NTSB passed the investigation to the FBI, which concluded that the witnesses were mistaken; it was in fact an accident.

Louis Freeh represented Bandar bin Sultan on issues surrounding the Al-Yamamah arms deal. He was FBI Director for over 8 years, after being appointed by George H. W. Bush, left a "legacy of corruption" at the agency, such as falsifying evidence about the OKC bombing.[7] He reportedly had a single car accident in 2014, but survived.[8]

The FBI has been widely criticised for incitement of attacks on US citizens, even by commercially-controlled media. In 2012 ect Censored reported that the "majority of terrorist plots in the United States" are actually incited by FBI agents, and reports that such informants receive cash rewards of up to $100,000 per case.[1][9]

Mark Gorton suggests that the FBI was instrumental in the 1993 World Trade Center Bombing, observing that Ali Mohamad worked for the FBI and requested his release.[10]