Difference between revisions of "Election/Fraud"

From Wikispooks
< Election
Jump to navigation Jump to search

In USA in particular, paper ballots have been either partly or wholly replaced by electronic voting systems, after measures such as the 2001 Help America Vote Act. Since voting machines leave no conventional paper trial, they are open to abuse. A mound of evidence exists both that many of the voting machines are easily hacked[1], that this is not accidental[2], and that the 2004 US election was decided as a result of fraudulent use of voting technology.[3][4]

In April 2016, Ron Paul stated that the American electoral system is rigged to keep "independent thinkers" from succeeding, adding that “I see elections as so much of a charade”.[5] 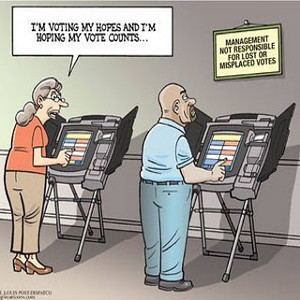