ECHELON is the catch-all name used to refer to the signals intelligence (SIGINT) collection and analysis network operated on behalf of the five signatory states to the UK–USA Security Agreement (Australia, Canada, New Zealand, the United Kingdom, and the United States, known as AUSCANZUKUS).

The system has been researched and reported on in a number of public sources. Its capabilities and political implications were investigated by a committee of the European Parliament during 2000 and 2001 with a report published in 2001,[1] and by author James Bamford in his books on the National Security Agency of the United States.[2]

The European Parliament commissioned an inquiry largely in response to allegations that Echelon was being used for personal, commercial and industrial espionage purposes to the advantage of participating state economies at the expense of other EU members. [3] The report agreed that, not only did the, code-named 'Echelon' exist, but that it was indeed being put to such uses. It's full title is:

Paragraph 1 of it's conclusions reads:

That a global system for intercepting communications exists, operating by means of cooperation proportionate to their capabilities among the USA, the UK, Canada, Australia and New Zealand under the UKUSA Agreement, is no longer in doubt. It may be assumed, in view of the evidence and the consistent pattern of statements from a very wide range of individuals and organisations, including American sources, that the system or parts of it were, at least for some time, code-named ECHELON. What is important is that its purpose is to intercept private and commercial communications, and not military communications.

Analysis has revealed that the technical capabilities of the system are probably not nearly as extensive as some sections of the media had assumed. Nevertheless, it is worrying that many senior Community figures, in particular European Commissioners, who gave evidence to the Temporary Committee, claimed to be unaware of this phenomenon.

Whilst questioning the technical sophistication and capabilities attributed to Echelon by sections of the mass media, it nevertheless concedes that, on the basis of information presented, ECHELON is capable of interception and content inspection of telephone calls, fax, e-mail and other data traffic globally through the interception of communication bearers including satellite transmission, public switched telephone networks and microwave links.

The report made a number of anodyne recommendations, with nods in the direction of the "legitimate interests of national intelligence services" and was very soon forgotten.

With the constant drumbeat of 'global security' concerns an the relentless propaganda of 'the war on terror' since its publication, it would be naive indeed to assume that, at the very minimum, Echelon's capabilities have not continued to increase at the pace of computing and communications technologies generally.

The following stations are listed in the EP report (p. 54 ff) as likely to have a role in intercepting transmissions from telecommunications satellites: 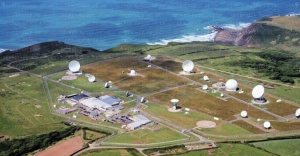