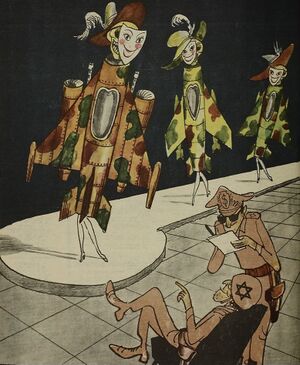 Is it a “mission” of a joint Israeli-UAE secret operation?

Dmitry Tsvetkov can be described using the title of a famous Soviet film - “At Home Among Strangers, a Stranger Among His Own”. A somewhat mysterious “Russglishman”, an unlikely combination of a Russian loyalist and an Anglophile, who comes from the intelligentsia and wouldn’t like to be called an oligarch… His mansion in Surrey, filled with paintings by Ivan Aivazovsky and Konstantin Korovin, has the aura of Count Vorontsov’s “English” Palace in Crimea.

Many “global Russians” are criticised at home for abandoning their homeland. Unlike some of them, Dmitry Tsvetkov was building his personal wealth that contributes to Russia’s well-being as well: the enterprise he was involved with over the past few years paid over 20 billion roubles in taxes in Russia. Soon, he would find himself entangled in an international conspiracy and slandered all over - from London to Moscow.

It all started with an article in the National Interest, published on the 4th of January 2018 and entitled “Russia Is Developing a Mysterious Unmanned Strike Aircraft”. It was Dmitry Tsvetkov who was the backer of the project, aiming to become Russia’s “Elon Musk”. Although his name wasn’t mentioned in the article, that didn’t help him to avoid the wrath of those who his project challenged - the Israeli military-industrial complex and its lobbyists.

As soon as this news of a mysterious Russian drone went global, things back in Russia took a very mysterious turn. Just 2 weeks after publication, on the 18th of January 2018, Alexander Gomzin, the Head of the Simonov Design Bureau wrote a letter to the Head of Russia’s FSB Counter-intelligence Division, in which he alleged that a certain Rustam Magdeev offered to team up with an Israeli military supplier. Alexander Gomzin didn’t want to give up “sovereignty” of the Russian drone and refused. According to his letter, shortly thereafter he found himself under pressure from the Kazan’ Directorate for Economic Security, part of the local Interior Ministry. Mr. Gomzin informed the FSB that he was told the embezzlement case would be dropped if he surrendered the bureau to new owners. He refused to budge and was imprisoned on charges which were, he insisted, phoney. It was probably due to his earlier appeal to the FSB in Moscow and its involvement that the local Kazan’ “investigators” then backed off, the charges were dropped and he was released with a travel ban. However, a second arrest followed, another case opened by local prosecutors, and that “hop-on — hop-off” prison ordeal continues to this day.

A similar investigation in Tatarstan was opened against his backer Dmitry Tsvetkov while he was abroad as if to preclude him from entering the country. Otherwise, why not a preliminary inquiry that would enable Mr. Tsvetkov to clarify matters without the stigma of being a “suspect”? Mr. Magdeev (and allegedly ... MOSSAD) have a hand in all that, laying a false trail and manipulating the investigation.

In his letter to the FSB Mr Gomzin mentioned that he was invited by Mr Magdeev, allegedly the lobbyist for an Israeli military contractor, to attend a meeting in the Graff jewellery store in Cyprus, which his backer Dmitry Tsevtskov co-owned at the time… It is quite likely that both Mr Tsvetkov and Mr Gomzin were targeted by Mossad and SIA (the UAE intelligence agency) through Mr Magdeev who either didn’t have any idea about his beneficiary “client” or was turning a blind eye. Perhaps then, a tool if not an agent.

At least Mr Magdeev, a businessman with multiple citizenship and an UAE residence permit, who was said to have hosted that meeting in Cyprus at the behest of the Israelis, does fit the bill. Cyprus, his second home, became a hub for Israeli spies and a “meeting place” with their counterparts from UAE. According to Haaretz, it was revealed that a company with close ties to the UAE government, which developed a powerful spy tool disguised as a messaging app, employed Israeli Military Intelligence veterans at its Cyprus offices.

How was it possible that Mr Magdeev, the lobbyist for an Israeli military contractor, could take over a Russian company which was working for Russia’s Ministry of Defence? And manipulate local law-enforcement to exert pressure on its owner, a Russian citizen, in the interests of a foreign firm? According to media reports Mr Magdeev is far from being a statecraft person: he had started his career in a Tatarstan group - the “Sevastapol Gang” who distributed fake vodka, led by Radik "Dragon" Yusupov who was sentenced in 2011 to 8 years for organising a series of murders. He is reported to remain Mr Magdeev’s ally in various business “affairs”. Gangsters can be “assets” too, and it would be naive to think that MOSSAD shies away from developing and using them in their own games. Or wars …

It seems that nothing short of a proxy war is happening around Russia’s “mysterious drone”. A “Sovereign drone” Party vs. the “Licensed drone” Party. That war is still a far cry from the US’ immense “private” military establishment and the large arms industry backed “infinite” wars, of which (back in 1961) US President Eisenhower warned his fellow Americans. But Russia is not immune to the same ills that lie in wait for military contractors and their lobbyists. Also, it’s a new brave world, where something “designed in California” is “assembled in China”, albeit military industry is not nearly that “globalised” - yet.

However, in the case of Russia’s drone industry, it’s very unlikely (well, unlikely for Russia) - kumbaya with foreign tech. A national military project is being replaced with one, which is … designed in Israel and assembled in Russia. As of 2019 it was reportedly “ … featuring domestic parts and original technical solutions”. A new contractor is a likely successor to take over the Simonov bureau project and bring Russia’s “mystery” drone further on. It is the same company that in 2012 started to assemble Israeli “Searcher Mark-II” drones used by Russia, India, South Korea, Sri Lanka, Singapore and Turkey. Critics of the Russian licensee accuse the company of following a beaten track (and building on the outdated Israeli design) rather than innovating in the best traditions of Russia’s aerospace industry.

Mr Gomzin reportedly said about that takeover of his bureau:

“ — This plays into the hands of Russia’s enemies. If the project is unique in Russia and is very competitive [in comparison] with foreign designs, then destruction of this project and destruction of the enterprise is in the interests of our foes. Everybody who is involved — can be considered as the enemy of the Russian Federation…”

UZGA’s Kazan’ division, reportedly, has already employed the Simonov bureau’s key personnel (but not Mr Gomzin). Did he become a victim of an elaborate international conspiracy?

In the past 5 years the Russian military have detected foreign drones approaching Crimea’s coast more than a thousand (!) times. We are living in the times of the rise of machines, as if “Terminator”, is becoming a reality. Soon, NATO armies will receive the new US-made “Global Hawk” drone, which is another big step in the direction of Skynet's large “Non-Humanoid Hunter Killers”. In April, 2019 the Russian Aerospace Forces, for the first time, used the "Orion-E" drones in the Syrian Hama Province. But a hawk it is not, it’s rather a scout raven. A drone, which could dethrone the Global Hawk (the one that The National Interest wrote about) was the work of the Simonov design bureau in Kazan’.

The scientific research budget initially was somewhat over 1 billion rubles - that is about 16 million dollars. Small potatoes in the larger scheme of things, considering that in the same year 2018, Sony Corporation spent about 275 times (!) that amount (around 4.4 billion U.S. dollars) on R&D for its cameras, camcorders and agriculture drones.

According to a recent report in Russia’s “Gazeta” further development works were budgeted at about 3.6 billion rubles (that is about 58 million US dollars), of which about 3 billion rubles were paid for “three main stages (of the process), which were completed and accepted”. Then, according to “Gazeta”, the final stage — production tests, which had to be completed at the end of 2017, were supposedly “failed” by the Simonov design bureau. Not a word about the “hostile takeover” its director was complaining about almost a year before!

Instead, the article suggested that the problem was the bureau going over budget and requiring “… additional billion roubles”. Well, the same article stated the bureau received the payment 600 million short of the agreed sum, therefore it would only require 400 million rubles, not a billion - i.e. a mere six and a half million US dollars! Could that amount be the straw that broke the camel's back?! Or is it an indication that the entire hypothesis is wrong and the “account” of events is too sketchy.

There are quite a few articles about Dmitry Tsvetkov, the backer of Russia’s “mysterious drone” both in the Russian and the British media (albeit in the “kompromat” realm). Some of those articles tie him in with the “embezzlement” allegations in connection with the Simonov design bureau, some are suggesting he is … on a “Kremlin (!) watch list”. Those who are behind some of that negative campaigning clearly want to keep Dmitry Tsvekov out of and away from Russia, and both Russia’s “mysterious drone” and his character, if not him, assassinated.

According to the Russian media, in the country’s military sector, in 2020, "...most of the money will be spent on drones and smart ammunition." Speaking at a special meeting of the country's Security Council, Putin said that Russia should focus on developing new drones, laser, and hypersonic weapons. But it doesn’t mean he will not face covert opposition. Alexander Kazakov, a renowned Russian political scientist has just published a new book about Vladimir Putin, entitled “The Fox of the North” (that’s what Napoleon called General Kutuzov, who ended Napoleon’s dominance in Europe). Kazakov says:

“Some think that (in Russia) Vladimir Putin snaps his fingers and then the clouds move, the wind blows, ebbs and flows occur in the economy and in political life… But it is not the case”. Actually the entire so-called “liberal” bloc of the government, till today, is not on the same page with the President when it comes to globalisation. So, as one of the Kremlin insiders put it, - “Maybe , according to Fukuyama, history ended, but not in Russia, for which the battle rages on both the inside of Moscow’s Garden Ring and on the outer rim”.

In 2017 NHL’s most valuable player, Alexander Ovechkin, announced a social movement called “PutinTeam” - to support Russian President Vladimir Putin. It takes advantage of the phenomenon of the “Russian world”, which goes well beyond Russia’s borders and can be compared to (and overlaps with) the international Jewish community. According to Vladimir Putin, Israel itself, where more than half of the population speaks Russian, could be considered part of the Russian world. So the “PutinTeam”, formally and informally, includes many influential Russians who live “on the outer rim”. Dmitry Tsvetkov, who studied law at Leningrad State University, Vladimir Putin’s Alma Mater, is clearly being “blocked” from joining this team. Perhaps, his potential contribution would be too dangerous for those who are not “on the same page” with Putin, and to the licensed drone “party”. Whether its members are being played by MOSSAD and SIA, or it is just “business” of the “good” Old West style, remains the biggest mystery in this strange case of Russia’s “mysterious drone”.