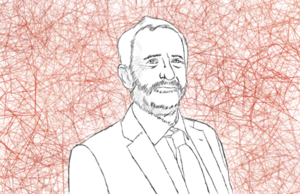 He'd his own allotment & made his own jam

★ Start a Discussion about this document
The Demonization of Jeremy Corbyn

For years, under the glitzy brand of ‘New Labour’ and its facile slogans of ‘modernisation’, the British Labour Party had been moving to the right. Encouraging people to get ‘filthy rich’, systematically reducing corporation tax, courting powerful press barons like Rupert Murdoch and committing to the type of bellicose foreign policy which would facilitate the death of hundreds of thousands in the bloody mire of Iraq. Inevitably, inexorably, Labour ceased to be ‘the party of dissent’ as its policies shaded seamlessly into the politics of the ruling elite more generally.

The process reached its apogee in 2013 when the then Labour Shadow Chancellor, Ed Balls, made a particularly significant pledge.[1] Although in opposition, he committed his party to the economic policy of the government, the ‘austerity’ measures which the Conservatives had introduced in 2010 and would perpetuate throughout the decade. ‘Austerity’ was an economic response to the 2008 financial crisis, and though the crisis had resulted from the profligacy and disregard of high finance, nevertheless ‘austerity’ was the means by which those at the bottom would be penalized, made to pay for the £1.3 trillion used to bail out the banks.[2]

It was, to put it simply, ‘socialism for the rich’. It represented the single largest transfer of public funds to the most wealthy layers which had ever taken place (for those aficionados of British social history – the second largest transfer of funds from the bottom to the top occurred in 1834 when the British government paid vast amounts of compensation to the wealthy for their losses in human cargo when the slave trade was declared illegal. No doubts a good number of their descendants were the beneficiaries of ‘austerity economics’ almost two centuries later).

But austerity was not simply about hard and fast finance policy. It crystallised the cruellest forms of economic individualism with a palpable loathing for those at the bottom. And in a way this was inevitable. If one refuses to acknowledge that the economic crisis was the responsibility of a financial elite and the product of a particularly volatile brand of casino capitalism, then one inevitably locates the fundamental economic problems of the age with those at the bottom. The poor immigrant, the single mother on benefits, the homeless person lying in the street, the foreigner living next door; these people were pilloried and demonised by a mainstream press which fortified the economics of austerity by providing its necessary ideological veneer.

The Labour Party could have enunciated the facts, soberly and conscientiously. On the question of immigration, for example, they might have pointed out that immigrants from the eight countries which joined the EU in 2004 (all poorer countries of eastern and central Europe) – contributed £4.96 billion more in taxes to the UK than they took out in public services in the period up to 2011.[3] But they didn’t choose to do so. Instead Labour’s movers and shakers hit upon a far more adroit and punchy concept – they issued a cup which proclaimed ‘Controls on Immigrants – I’m voting Labour’. (On the plus side, every crank and immigration obsessive nationwide now has something from which to sup.)

It is, therefore, vital to understand how, by 2015, the two main political parties in Westminster had reached a form of consensus both in terms of ideology and economics, and how both elements were fused in the politics of austerity. It is vital to recognise this because the political event of Jeremy Corbyn can only be understood from such a context. Since becoming Labour leader, Corbyn has shattered that consensus. He has endeavoured to shift the focus from those at the bottom to those at the top, arguing that the crisis was the responsibility of a rich elite and that they should be the ones to bear the financial brunt for it.

On the question of immigration he has consistently argued that it is anything but ‘a problem’, rather we should celebrate the ‘enormous contribution to our society’ that immigrants make.[4] As a backbencher he had refused to march to the drums of patriotism and war, opposing the interventions in Iraq and Afghanistan at every turn. As leader of the Labour Party, he has opposed any military intervention in Syria, while condemning the government and the UK weapons industry for supplying weapons to countries such as Saudi Arabia and Israel facilitating the ongoing decimation of the Yemeni and Palestinian populations.

So much of this had hitherto fallen beneath the radar, had been smothered by the mainstream consensus. But the Corbyn phenomenon was now amplifying these simple and human truths in the most public of forums. Exposing the grotty and illicit machinations of much of the political class as grounded in elite self-interest hitched to ever more vicious forms of economic exploitation on the domestic front – while at the same time shedding light on the illicit interconnections between government, a booming arms industry and the series of never-ending wars abroad. The Corbyn movement, therefore, emerged as a living, grass-roots critique of elite politics as business-as-usual (with no small emphasis on the word ‘business’).

For this reason, the reaction of the political establishment to the Corbyn and the politics of ‘anti-austerity’ was inflamed to baying, hysterical proportions, but more significantly it was the type of response which once again demonstrated how the mainstream media, the state broadcaster, the politicians and political pundits were functioning almost as one – a seamless, coordinated political entity with a uniform voice.

In another lifetime it might almost have been satirical. Corbyn, a social democrat of a reformist bent, something of a pacifist, a genuine but at times muddled speaker, the type of earnest community-minded activist who had his own allotment and made his own jam – this same figure was transfigured by a rabid establishment into successive manifestations of the purest evil; he was a terrorist sympathiser,[5] a threat to national security, a communist spy,[6] a misogynist[7] and a dyed-in-the-wool anti-Semite.

The allegations were all false, based on the flimsiest of claims; his commitment to terrorism was gleaned from photos where he appeared shaking hands with Sinn Féin leader, Gerry Adams, but the latter had shaken hands with other politicians such as Bill Clinton and Tony Blair as part of negotiations toward a peace settlement. Most absurdly of all, the threat Corbyn posed to national security was demonstrated by the fact that he had not bowed sufficiently low at a remembrance ceremony for those killed in war.[8]

It was as though the establishment was trying one smear after the other in order to see which would best stick. In the event, the allegations of anti-Semitism proved most effective. Perhaps because there is a fringe element on the left which does have a problem with anti-Semitism, something that has become more pronounced with the rise in conspiracy theories which followed the events of September 11th and decades of working class defeat.[9] As August Bebel once remarked, ‘anti-Semitism is the socialism of fools’. Perhaps because the Corbyn administration was not quick enough to act effectively against some of the cases of genuine anti-Semitism which had emerged within the party. But the facts were still clear. The party received 673 allegations of anti-Semitism toward Labour members from April 2018 to January 2019, which amounted to around 0.1% of the overall party membership (a membership which stood at around 500,000).[10] But reportage which gave a dry and sober account of the statistical facts was simply replaced with the yowling, furious but utterly dogmatic assertion that Corbyn’s party was institutionally anti-Semitic and represented an existential threat to the safety of Jews living in the UK.

In the run up to the election of 12 December, the organised, orchestrated attempt to torpedo the Corbyn campaign has once again reached a shrieking crescendo with the most privileged layers unleashing a coordinated and continued barrage of slander. At the most opportune moment, as the election campaigns for both the Conservative and Labour opened up, chief Rabbi, Ephraim Mirvis, reignited the anti-Semitism controversy (even though no new allegations had been aired) by once again describing Labour in terms of an institutional anti-Semitism – ‘a poison has taken root’.[11]

This was an explicitly political intervention, a tacit endorsement of the Conservative Party whose leader the wealthy Rabbi is on kind terms with, and completely out-of-kilter with the supposed impartiality of religious institutions. The press, the BBC, the newspapers and the radio stations were at once flooded by the Rabbi’s words, words which were again treated as the gospel of established fact.

At the same time, a very different attitude is displayed toward the Prime Minster Boris Johnson. Whereas you will never find a sexist, Islamophobic or anti-Semitic statement uttered by Jeremy Corbyn, Johnson, on the other hand, seems to have ‘Tourette’s for bigots’ syndrome, and over the years has gone on to describe black people as ‘piccaninnies with water melon smiles’ Muslim women as looking like ‘bank robbers’ and ‘letterboxes’, working class men as ‘drunk, criminal and feckless’, working mothers as having children more likely to ‘mug you on the street corner’, single mothers as ‘irresponsible’, and a host of other such charming epithets too numerous to mention.

If Corbyn had made any one of these comments, of course, it would have been purveyed ad-infinitum, but the press, papers and TV channels gave Johnson an easy ride, allowing these things to disappear before the image of the bumbling, benevolent, gaff-prone but essentially goodhearted persona Johnson has so cynically and effectively contrived.[12] Perhaps most sinisterly of all, when the Prime Minster was being questioned about honesty (given his public record of prolific lying) the audience en masse broke into laughter as Johnson began speechifying on how important the truth was to him. But in the evening edition of the same programme, the BBC edited out the laughter, something which brought the state funded broadcaster and supposed bastion of impartiality closer to the type of propaganda technique employed by the various totalitarian regimes Corbyn is always, and quite unfairly, characterised as supporting.[13]

When everything else is stripped away, what we are really witnessing is the ruthless, organised and systematic response on the part of the privileged to the possibility of an ‘anti-austerity’ form of politics which threatens their domination of the political machine and their ability to expand their economic power unfettered by any consideration for the society at large and any social good. It is an election which truly exposes the fault lines between wealth and poverty, elite power and grassroots democracy, neoliberalism and a dying welfare state, the interests of the many, and those of the few. It exposes these fundamental divisions…if only you are prepared to look.