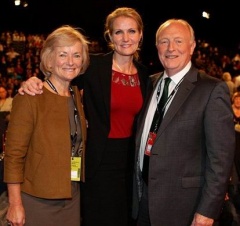 Neil Kinnock appeared on both Dispatches and Panorama this evening bemoaning the presence of socialists in the Labour Party. Neither programme succeeded in finding anything sinister happening, but they did succeed in playing a great deal of sinister music. This must have been a great boost to the sinister music writing industry, for which we should be grateful. I think they have definitively proved that some people are left wing, and would like to have left wing MPs.

But seeing Kinnock reminded me of another bit of TV I saw today, a heartbreaking advert for Save the Children featuring a dying little baby, unable to ask for help. The advert urged you to give just £2 a month to help save her.

If 11,000 people responded with £2 a month, that would not save the little baby, but it would exactly pay the £264,000 per year salary of Neil Kinnock’s daughter-in-law Helle Thorning-Schmidt, Chief Executive of Save the Children and wife of MP Stephen Kinnock. Indeed if 20,000 people gave £2 per month, that would probably cover Mrs Stephen Kinnock’s salary, her other employment costs and the money paid to Sky for the advert. When you toss in Stephen’s salary and expenses, the Stephen Kinnock household are bringing in just shy of a cool half a million pounds a year from public service and charity work.

The salary of Ms Thorning-Schmidt is approximately twice that of her predecessor, Justin Forsyth, who was on an already unconscionable £140,000. I exposed their massive salaries at the time the Save the Children awarded a “Global Legacy” award to Tony Blair. Indeed to meet the salaries and other employment costs of just the top executives at Save the Children would take 80,000 people paying £2 a month. They would be funding executives with an average salary of over £140,000. For those in work paying the £2 a month, the average UK salary is £26,000 a year, and many retired and unemployed people scrimp to find money to give to try to help the needy.

The use of charities as a massive cash cow for the political classes is a real concern. David Miliband is on over 300,000 for heading the International Rescue Committee. When I listed the Save the Children executives, they included Brendan Cox, on over £100,000. He was the husband of Jo Cox, the murdered Labour MP. Brendan Cox and Justin Forsyth were both advisers to Gordon Brown and both moved to Save the Children when they lost their jobs on Brown losing power, sliding in on 6-figure salaries. Jo Cox was an adviser to Glenys Kinnock and left that job to be an executive at Oxfam before she too worked as a highly paid Save the Children executive.

Brendan Cox left Save the Children due to allegations from several women that he sexually harassed female staff and volunteers. Justin Forsyth left at the same time amid allegations he had not effectively acted to have his friend Cox investigated. This has not stopped Forsyth from now popping up as Deputy Chief Executive of UNICEF. Misery for some is a goldmine for others.