Difference between revisions of "Document:Navalny, Ukraine and the West" 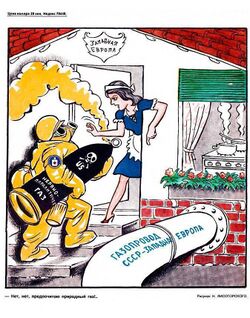 Rhys James is the pen name of a Moscow-based journalist specialising in geo-political affairs
Cartoon right: The US (the man in a hazmat suit) brings a canister labelled “nerve agent” to Western Europe (the housewife). She points at the Russian gas pipe saying: “No, we prefer natural gas”. The whole Navalny operation being probably aimed at attacking the Russia-Europe “North stream 2” project.

★ Start a Discussion about this document
“We came, we saw, he (almost) died”. Navalny, Ukraine and the West

On July 29th the Belarus official Belta news agency reported that “Belarussian law enforcement has detained 33 mercenaries, from the private Russian military contractor Wagner Group, less than two weeks before the country's presidential election”. "Two or three" of the detained Russians had served in Donbass. The Kremlin was accused of a “plan” to destabilise the situation during the election campaign to instigate a takeover. Vladimir Zelensky, President of Ukraine, “warned” Belarus authorities that they would “… have another Donbass on their territory”.

Belarussian President Alyaksander Lukashenko demanded an explanation from Moscow at an emergency government meeting. As usual, Moscow did not release an immediate comment. Later, President Putin said it was a joint operation of the US and Ukrainian special services. As usual, his critics accused him of playing the blame game and creating a smokescreen. It turns out he didn’t exaggerate anything.

On September 9th Andrey Bogdan, a former head of the Ukraine President’s office, admitted in a television interview that the “scandal” was a joint provocation organised by the CIA and GUR (Ukrainian military intelligence). Ukrainian intelligence lured suspected Russian private contractors to Belarus. Its officers posed as the reps of a Rosneft subsidiary in Venezuela and offered them a big security contract. The original plan was for Wagner contractors to fly from Minsk to Istanbul (since there were no flights from Moscow due to the coronavirus flight ban) on July 25th - the plane was to make an emergency landing in Ukraine due to a passenger falling ill (this “passenger” would be an SBU agent). The Russians would then be arrested on Ukrainian soil. But the Belarussians jumped the gun and spoilt the plan.

A month later another passenger, who really did fall ill during a flight from Tomsk to Moscow, would present both international and domestic Kremlin-bashers with another opportunity.

As of the time of writing Alexei Navalny, Russia’s prominent opposition activist, is coming out of an induced coma and is reportedly improving in a German hospital after he was saved by Russian doctors in Omsk. Alexei was extremely fortunate that the S7 (Russia’s biggest domestic airline) airplane was able to make a rapid emergency landing there en route from Tomsk to Moscow. The speedy emergency landing alone (which involves an air traffic controller, a state employee in Russia) should exonerate the Russian state from any conspiracy theory that it “planned” to get rid of the activist and blogger … who is supported by a mere 3% of Russia’s voters, 2% short of the country’s electoral threshold. Yet there is no end to the outcry in both Western MSM and Russia’s social media networks. Only “Russian” in inverted commas as only one of them, VKontakte, is actually Russian and, unsurprisingly, is the least incendiary. The rest, along with the usual Russophobic info-warriors such as Radio Liberty’s Russian Service and various others, are saying it’s the “Kremlin” (or that old standby the “KGB”) that “tried” but curiously failed, despite it’s home advantage, to poison the Kremlin’s critic.

Yet it never occurs to the choir of Kremlin-bashers that such a failure is normally the sign of a covert attempt of a visiting team playing on a foreign field (or outsourcing to a less competent criminal actor). Precisely the same MSM argument in the case of the Scripal “poisoning” that was pinned on Russians, yet could also have been an entrapment op aiming to mock Russians and stitch them to a chemical “attack” as in Syria. Despite the Germans’ “Novichok” assertions, it is still too early to speculate about Mr. Navalny’s condition, its causes and whether any poison was really involved (and if yes, at what stage), but we can still put the “poisoning” theory in a broader context. What is of interest here in terms of social and cultural anthropology: why is it that the Kremlin and “KGB” are always presumed guilty while the White House and the CIA almost always wear the judges’ mantle? The answer is simple, to rephrase James Carvile “… it’s the movies, stupid”. Well, save for a few exceptions such as the “House of Cards”. In the fifth season Tom Yates, a writer, dies in Claire’s (the First Lady) arms while having sex with her after she poisons him. But that was a rare revelation of America’s dark subconscious compared to the ranks of self-congratulatory and self-righteous characters with a license to kill.

TV and film viewers who give them that “artistic license” get unconsciously caught in a trap: they let those purely fictional characters shape their perception of the real world as their suspension of disbelief spills over into real life. In that imaginary universe, most Arabs are terrorists, most Italians are (or used to be when they mattered) mafia, and most Russians are both mafia and spies save for those 2% “good guys” who support Navalny.  These day-dreamers simplistically view the US as a magical land of Marvel, the home of Disney whilst the CIA are the "Guardians of the Galaxy". Can that country, which gave the world Tony Stark and Elon Musk, do any bad? Is it even capable of any bad? - Hiroshima? What Hiroshima?! How about “American Holocaust”, the book about the extermination of America’s natives, in which David Stannard contends that the perpetrators of the American Holocaust drew on the same ideological wellspring as did the later architects of the Nazi Holocaust? Well, “people don’t read any more”. Well, some of us still do.

Speaking of wonders that supposedly make a country “good”. Great Goethe, Heine, fantastic Leica, Zeiss and Mercedes-Benz didn’t prevent Nazi Germany from undertaking the most horrific things in human history and killing millions of people, including 27 million Russians. Those German “brands” did not preclude and even “helped" Nazism, which was "beautifully packaged" by the likes of the Hugo Boss firm, which sewed up SS uniforms. That ominous Nazi “DNA” was "exported" to the US after WWII when the CIA employed hundreds of Nazis, including chemists. They have helped the CIA to create a biochemical “Devil’s kitchen" in Fort Detrick. Their diabolical experiments and ideas have found application within the CIA: from the “MK Ultra” program to the creation of some of the most sophisticated poisonous substances.

Yes, we have a lot of good people in the US, Harrys and Sallys, most of them are good Samaritans and we even have a Good Samaritan Law. But if we have the “Devils’ kitchen" too, then some of its cooks must be ….well, not angels but demons. Capable of bad deeds and good at dark arts, including creation of, say, a “false flag” poison.

When I saw the video filmed on the plane, in which Alexey Navalny was screaming more with horror than with pain, I recalled the CIA’s Sidney Gottlieb and his terrible experiments with hallucinogens. And it is not a conspiracy theory, but at least, say, a viable idea (for a film?) based on the cynical logic of the “projects” by that “CIA inside the CIA” that the "Three Days of the Condor” film warned us about. One of those truly marvellous American films before the “Marvel” era.

The Sklifosovsky Institute, Russia’s state-of-the-art top emergency hospital, tested Aleksei Navalny’s biomaterial. The samples were delivered to the Institute’s lab on August 29th and the results state "...no phosphorus-organic substances or cholinesterase inhibitors have been found.” The tests were run on an “Agilent” mass spectrometer, which, according to the US firm that makes it, “provides the capabilities and performance to solve virtually any analytical challenge”. Deep freeze at -20C ensures the blood sample can “live” a very long time, and the DNA match would counter any potential speculations that the biomaterial wasn’t his.

If I were writing a script for a sequel to “Three Days of the Condor" (if anybody in today’s Hollywood would even dare to entertain the idea), the poisoning of a Russian politician would be an ideal “false flag” operation aiming to destabilise Russia. Who would benefit most: Ukraine, Biden in the US, or the anti-Russian lobby in the UK hell-bent on “joining in” with it all during the Skripal Affair  - I’d have to wait and see how the real-life saga with Navalny is played out in order to base the script on a true story.

How was it done? Who could pour a hallucinogen or other poison in Navalny’s tea or into his food? In France, during a CIA experiment in the small town of Point-Saint-Esprit, the poison was hidden in flour - after all French love their croissants! Similarly Russians like their tea:

Of single boredom, right away
They speak–but in a cunning way.
They call him to their samovar–
None but Dunya will pour the tea…

Who poured Alexei Navalny his tea? Or was it a stranger, wearing a super-thin protective glove, who shook his hand - we’ll probably never know.

If he was poisoned (with a “smart” poison, which mimics some of the effects of “Novichok”?), the one who did it most likely didn’t know who he was working for. How did the Germans “identify” the effects of “Novichok” if the nerve agent itself did not show up in the mass spectrometer test? Did they hunt down something that they were lured to by the (CIA, SBU, etc?) poison developers aiming to frame the Russians?

Now all those secrets will be safe enough behind the walls of a good German hospital where Navalny was sent by his friends (… are they all “friends”?) and delivered there by the good guys (should I put them in quotes too?) - the German military accompanied by BND agents, the German “CIA”. The “devil” in such details would give an old school screenwriter like myself enough to see the “Devil’s kitchen” here, looming menacingly in the background.