Document:How to Keep Going During the Next Energy Crisis 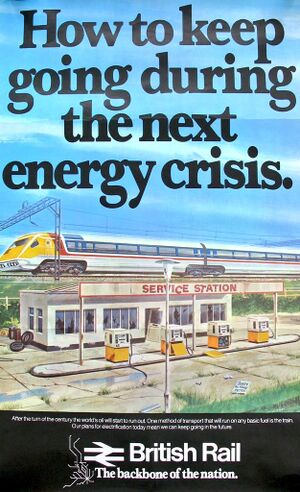 Much of what we are seeing – at a constitutional, economic and social level – is the long-tail of Thatcherism. Today – in the middle of the current crisis – the privatisation of energy and railways looks particularly unwise. The latter was specifically aimed at undermining the trade unions by shifting freight from rail to road. The truckers were the epitome of individual Thatcherites – and the consequences were environmentally disastrous.

What we are seeing now is the “just in time” delivery system falling apart.

According to Richard Seymour:

"In the early 80s recession, the Tories had begun to propose privatisation as a potential panacea. Conservative MP Geoffrey Howe extolled the 'discipline' of the marketplace. The emerging doctrine was that privatisation would make the large utilities more efficient and productive, and thus make British capitalism competitive relative to its continental rivals. In this period, the government sold off Jaguar, British Telecom, the remainder of Cable & Wireless and British Aerospace, Britoil and British Gas.

"The focus had shifted to privatising core utilities. This policy did not emerge out of nowhere; it was fully embedded in the Hayekian ideas that had guided Thatcher and her cohort in opposition. But it did develop in relation to specific policy objectives.

"It was not just a question of stimulating private sector investment, but also of culture war intended to re-engineer the electorate along the lines of the 'popular capitalism' vaunted by Thatcher, and announced in the infamous 'Tell Sid' campaign.”[1]

“Following the Tories’ third election victory, they were sufficiently confident to roll out their most aggressive privatisation programme yet. British Steel, British Petroleum, Rolls Royce, British Airways, water and electricity were among the major utilities for sale.”

All of this had a consequence far beyond Britain. In a homage to Thatcherism Chris Edwards writes on CapX:

“The British Telecom (BT) IPO in 1984 was a mass share offering, which “did more than anything else to lay the basis for a shareowning popular capitalism in Britain,” said Thatcher. The government ran high-profile television ads to encourage the purchase of BT shares 'It’s good to talk' and more than two million citizens participated in the largest share offering in world history to that date.[2]

"Selling the 250,000-worker BT was a bold decision, and its success generated momentum for further reforms. The OECD called the BT privatisation 'the harbinger of the launch of large-scale privatisations' internationally.”

Sold off by the Tories

The social chaos unwinding on your forecourts and timelines is the long-term consequence of decades of privatisation, core industries run for profiteering with no thinking about the socio-ecological consequence.

As people face mass fuel poverty the dark irony is that all of these “British” institutions were sold off by the Tories, now desperate to defend the very concept of Britishness they’ve sold.