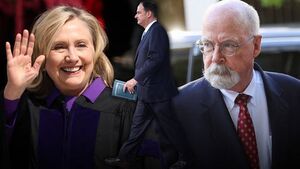 ★ Start a Discussion about this document
Hillary Clinton Did It

The Russia-Trump collusion narrative of 2016 and beyond was a dirty trick for the ages, and now we know it came from the top—candidate Hillary Rodham Clinton. That was the testimony Friday by 2016 Clinton campaign manager Robby Mook in federal court, and while this news is hardly a surprise, it’s still bracing to find her fingerprints on the political weapon.

Mr Mook testified as a witness in special counsel John Durham’s trial of Michael Sussmann, the lawyer accused of lying to the FBI. In September 2016, Mr Sussmann took claims of a secret Trump connection to Russia’s Alfa Bank to the FBI and said he wasn’t acting on behalf of any client. Prosecutors say he was working for the Clinton campaign.

Prosecutors presented evidence this week that Mr Sussmann worked with cyber-researchers and opposition-research firm Fusion GPS to produce the claims on behalf of the Clinton campaign, and to feed them to the FBI. An FBI agent testified that a bureau analysis quickly rejected the claims as implausible. (Mr Sussmann has pleaded not guilty.)

Prosecutors asked Mr Mook about his role in funnelling the Alfa Bank claims to the press. Mr Mook admitted the campaign lacked expertise to vet the data, yet the decision was made by Mr Mook, policy adviser Jake Sullivan (now President Biden’s national security adviser), communications director Jennifer Palmieri and campaign chairman John Podesta to give the Alfa Bank claims to a reporter. Mr Mook said Mrs Clinton was asked about the plan and approved it. A story on the Trump-Alfa Bank allegations then appeared in Slate, a left-leaning online publication.

On 31 October 2016, Mr Sullivan issued a statement mentioning the Slate story, writing, “This could be the most direct link yet between Donald Trump and Moscow.” Mrs Clinton tweeted Mr Sullivan’s statement with the comment: “Computer scientists have apparently uncovered a covert server linking the Trump Organization to a Russian-based bank.” “Apparently” is doing a lot of work in that sentence.

In short, the Clinton campaign created the Trump-Alfa allegation, fed it to a credulous press that failed to confirm the allegations but ran with them anyway, then promoted the story as if it was legitimate news. The campaign also delivered the claims to the FBI, giving journalists another excuse to portray the accusations as serious and perhaps true.

Most of the press will ignore this news, but the Russia-Trump narrative that Mrs Clinton sanctioned did enormous harm to the country. It disgraced the FBI, humiliated the press, and sent the country on a three-year investigation to nowhere. Vladimir Putin never came close to doing as much disinformation damage.[1]

"For six years I have been telling you that the Trump-Russia story in all its manifestations, including dragging in entirely false claims about Wikileaks, and the whole charlatan Steele narrative, was a huge hoax.

"That quote today is the WSJ Editorial Board."[2]