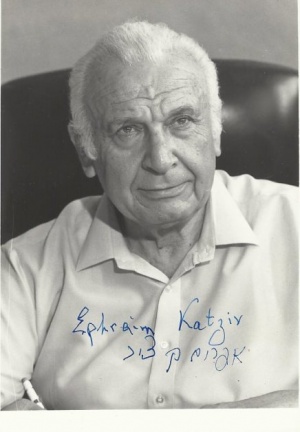 I recently wrote a post which recounted two episodes in Israeli history in which the IDF resorted to biological warfare against its Arab enemies. In one case, Moshe Dayan brought home tubes containing typhus to be used in poisoning the water supply of the Jordanian Legion (which instead infected the Israeli leader’s son, Assi with the disease); and another, in which Palmach infiltrators attempted to poison Gaza’s water supply, but were caught and executed.

In the course of my post, I referred to Israel’s highly advanced chemical and biological warfare unit in Ness Ziona, which is known to produce weapons used in poisoning or assassinating Mossad targets (among other things). But I didn’t know that this highly secretive facility was founded by Israel’s fourth president, Ephraim Katzir [1]. Avner Cohen, the leading Israeli historian of his nation’s WMD programs, wrote a paper in 2002 in which he recounted a highly reluctant interview that Katzir gave to Hadashot journalist, Sara Leibovich-Dar, [2] in which he dissembled his way through a self-serving account of the WMD program he created. Here is Cohen’s account, which quotes the original article (the initials “BW” refer to biological weapons):

In 1993, in an extraordinary, “reluctant” interview with journalist Sara Leibovitz-Dar of the Israeli newspaper Hadashot, Ephraim Katachalsky (who later took the Hebrew surname Katzir) and Alexander Keynan explained the circumstances that led to the establishment of HEMED BEIT.
Katachalsky stressed the historical context. It was only two years after a group of Holocaust survivors had sought his assistance to avenge the Nazi genocide of the Jews through a mass poisoning of reservoirs in Germany’s largest cities. Moreover, as a matter of historical context, every major combatant state in World War II had a BW program. Reflecting almost 45 years later on the rationale behind the founding of HEMED BEIT, Katzir noted the following: “I was involved in HEMED BEIT from the beginning. We planned various activities, to get a sense what CBW is and how could we build a potential [in this area] should there be a need for such a potential. We needed to know how to defend [against such weapons]. . . . I thought that we ought to know what was going on in this field. We knew that in the surrounding countries others were also developing BW. [We believed that] scientists should contribute to the strengthening of the State of Israel.” In fact, this retrospective account is inaccurate and self-serving. No evidence suggests that in 1948 any of the surrounding Arab countries were developing BW, and HEMED BEIT was probably not created for defensive purposes.

In fact, Katzir’s defense of his work reminds me of the arguments advanced by anti-Soviet Cold Warrior Edward Teller defending development of the hydrogen bomb and other American WMD. The arguments also aren’t far removed from arguments advanced today by Israeli generals to defend their use of weapons and tactics banned (or at least condemned) by international law including white phosphorus, cluster munitions and DIME.

But what’s especially important about Katzir’s role is that he, a biophysicist engaged in scientific research of highly dubious moral or utilitarian purpose (a view supported by the nominal IDF commander of Hemed Beit at the time of its founding, who wanted nothing to do with it for this reason), became Israel’s president. It is common knowledge that Israel’s prime ministers have blood on their hands from Yitzhak Shamir to Menachem Begin to Ariel Sharon; and that they could, at one point in their careers, have been called terrorists. But this involvement of the highest levels of Israeli leadership with chemical and biological weapons is much less well-known. It would be as if Edward Teller had become president of the United States and his political position somehow vindicated the fact that he used science in order to both advance American strategic dominance in the world and introduce WMD that could kill half the human race (or more).

Leibovich-Dar also delved into other incidents in which Israel used biological weapons against its enemies. Until I read this, I had no idea that the IDF had actually poisoned the water supplies of many Palestinian villages in 1948, the largest of whom was Acre, in which a typhus epidemic raged in the days before Israel conquered it in 1948. This was a campaign not only to panic inhabitants into leaving, it was meant to prevent them from returning. In this sense, the use of biological weapons was a tool of the Nakba, a way to guarantee that expelled Palestinians could not return to their native villages and re-populate them.

Cohen discovered research by a Dutch journalist that proves that Ness Ziona had an important scientific component devoted to the study of nerve gas toxins. It also specialized in chemical agents that could incapacitate individuals for periods of time. Such weapons were used regularly by the Mossad when it kidnapped and transported individuals from Adolph Eichmann to Mordecai Vanunu to Israelis who spied for the enemy, back to Israel for trial. It was used as recently as 2011, when Mossad agents incapacitated Dirar Abusisi after kidnapping him in Ukraine and shipping him on a plane in a coffin to Israel.

The Israeli historian also notes that an El Al plane crashed on take-off from Holland’s Schiphol Airport in 1993. In 1998, then PM Bibi Netanyahu acknowledged the plane had been carrying “a chemical component” of sarin gas. [3] He lied in claiming it was being imported to test gas masks. In fact, tons of various chemical agents used to produce sarin were in the plane’s cargo and destined for Ness Ziona to be used in its chemical warfare experiments. The plane completely burned on impact and the surrounding residents suffered massive and damaging health impacts for years afterward. It’s inconceivable that Israel was never held to account for this horrific accident, which further illustrates the grave danger such chemical weapons programs pose to the unsuspecting world. There have been at least four major accidents at Ness Ziona in period from 1987-2002 which killed at least four people.

Cohen notes tellingly that Israel has refused to ratify either the Chemical Weapons or Biological Weapons Conventions. The U.S., he writes, maintains a list of 12 nations which have offensive chemical or biological weapons programs. None of the twelve include Israel, but two nations are unnamed. I’ll let you be the judge of their identities.

In light of the clamor among western nations against Syria’s alleged preparation of chemical weapons for use by the Assad regime against rebel fighters (remember too, the 1991 uproar about Saddam Hussein arming his SCUDs with chemical weapons?), it’s important to keep in mind that Israel has even more sophisticated capabilities and has used them in the past (not just in the 1948 incidents mentioned above, but also in the assassinations of Khaled Meshal, Mahmoud al-Mabouh, and possibly Yasser Arafat, for example). For that reason alone, and because Israel has willingly used other banned weapons, it’s critical to monitor its potential use of chemical or biological weapons.

Iran is a case in point. Israel has many targets, both facilities and individuals, it would want to eliminate. There may be a temptation to use such agents in the event of an Israeli attack on Iran. Israel would probably never use chemical or biological weapons as indiscriminately as putting them on missiles. But it might use them in more highly targeted and less traceable ways.

There is another important dimension of Leivovich-Dar’s article that Cohen emphasizes. No one wanted to talk about Israel’s use of biological weapons. Cohen notes that all the archives involving Hemed Beit are permanently sealed and few, if any Israeli historians have clamored for it to be opened. The Israeli journalist expands further on this:

Everybody who had something to do with those activities prefers today to keep silent…What was done then, with deep conviction and zealotry, is nowadays concealed with shame. Among the living, most preferred to keep silent, meetings were cancelled at the last moment, phones were hung up when people understood what was involved. ‘Not everything we did in those days requires discussion,’ said Ephraim Katzir.”

Luckily we have historians and journalists who think otherwise.

Katzir was an unwilling interviewee. After the article was submitted to the IDF censor, they refused to allow its publication. Only after an appeal to a special censorship appeals panel was the article approved. In other words, Israel’s military powers that be didn’t want the public to know about Ness Ziona, about Israel’s chemical weapons capabilities, and they didn’t want the public to know about Katzir’s scientific role in developing WMD.

Students of the Holocaust often talk about how much the German people knew about the Holocaust while it was happening. In the case of Israel’s WMD programs, a similar dynamic is in play. Israelis (including many journalists and academics who would ordinarily be expected to delve into such issues) shy away from delicate national security issues. There are clearly many moral quandaries that they represent, but it is all subsumed under security, as if existential matters trump matters of morality. That allows Israelis to abandon the subject to their “betters,” the generals and politicians who manage it all for them. It’s a Faustian bargain, but one that has held since the earliest days of the State.