Document:Bloodbath in Odessa guided by interim rulers of Ukraine 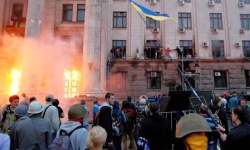 
Wikispooks Comment The Atlanticist media stubbornly presents the crimes committed in Odessa on 2 May as the result of an accidental blaze, while the photos and video footage available leave no doubt that the victims were tortured and murdered before being burned. This is first-hand information on how the operation was organized and executed under the direct and personal authority of coup-appointed acting President Olexander Turchinov. 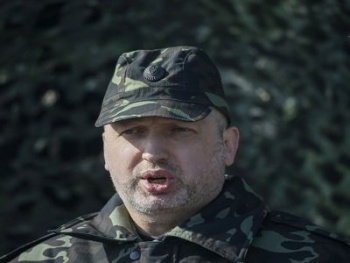 Putchist president Olexander Turchinov chaired the meeting that planned the operation in Odessa.

The information provided below was obtained from an insider in one of Ukraine’s law-enforcement agencies, who wished to remain anonymous for obvious reasons. It is clear that there are people even within the interim administration in Kiev who are against what happened in Odessa on 2 May and throughout the whole country [1] [2]

After the loss of Crimea and the popular uprising in Mariupol, Odessa is now Ukraine’s only gateway to the sea, thus making it the most important city in the country after Kiev.

Ten days before the tragedy a secret meeting was held in Kiev, chaired by the incumbent president Olexander Turchinov, to prepare a special operation in Odessa. Present were minister of internal affairs Arsen Avakov, the head of the Ukrainian Security Service Valentin Nalivaychenko, and the secretary of the National Security and Defense Council Andriy Parubiy. Ukrainian oligarch Ihor Kolomoiskiy, the Kiev-appointed head of regional administration of the Dnepropetrovsk region, was consulted in regard to the operation.

During that meeting Arsen Avakov has reportedly came up with the idea of using football hooligans, known as “ultras,” in the operation. Ever since his time as the head of the Kharkov regional administration he has worked closely with the fans leaders, whom he continued to sponsor even from his new home in Italy [3].

Ihor Kolomoisky temporarily delivered his private “Dnieper-1” Battalion under the command of law-enforcement officials in Odessa and also authorized a cash payment of $5,000 for “each pro-Russian separatist” killed during the special operation. 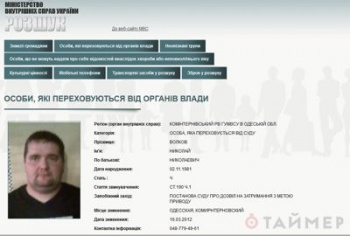 Mykola Volvov was wanted by the Ukrainian police since 2012 for fraud.

A couple of days before the operation in Odessa Andriy Parubiy brought dozens of bullet-proof vests to local ultra-nationalists [4]. This video shows an episode of handing the vests to the local Maidan activists in Odessa. Take note of the person who receives the load. He is Mykola Volkov, a local hard-core criminal who would be repeatedly videod during the assault on Trade Unionist House gun-shooting at the people [5] and reporting about the “incident” by phone to an official in Kiev [6].

Ultranationalist militants from the extremist Ukrainian National Assembly (UNA-UNSO), who could be recognized by their red armbands, were also used during the operation. They were assigned a key role in the staging of the provocations: they masqueraded as the defenders of the tent city on Kulikovo Field, and then lured its occupants to the House of Trade Unions to be slaughtered.

Fifteen roadblocks were set up outside of Odessa, secured by militants under the personal command of Kolomoisky’s “Dnieper-1” Battalion, as well as Right Sector’s thugs from Dnepropetrovsk and the western regions of Ukraine. In addition, two military units from the Self-Defense of Maidan arrived in Odessa, under the command of the acting head of the administration of the president, Sergey Pashinsky – the same man who was caught with a sniper rifle in the trunk of his car on 18 Feb 2014 on Independence Square (Maidan) in Kiev [7]. Pashinsky later claimed that he had not been fully informed about the plans for the operation and had dispatched his men only to “protect the people of Odessa.” Thus, there were a total of about 1,400 fighters from other regions of Ukraine in the vicinity at the time –thus countering the idea that there were “residents of Odessa” who burned down the House of Trade Unions. Dmitry Fucheji mysteriously dissappeared soon after the tradegy in Odessa. 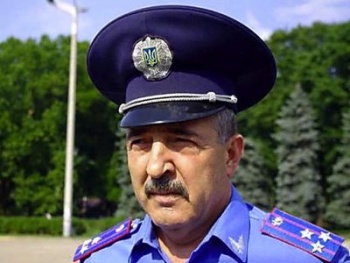 Deputy chief of Odessa police and principle coordinator of the operation

The role of the Odessa police forces in the operation was personally directed by the head of the regional police, Petr Lutsyuk, and his deputy Dmitry Fucheji. Lutsyuk was assigned the task of neutralizing Odessa’s regional governor, Vladimir Nemirovsky, to prevent him from putting together an independent strategy that could disrupt the operation. Fucheji led the militants right to Greek Square where he was allegedly “wounded” (in order to evade responsibility for subsequent events).

The operation was originally scheduled for 2 May – the day of a soccer match, which would justify the presence of a large number of sports fans (“ultras”) downtown and would also mean there would be a minimal number of Odessa residents on the streets who were not involved in the operation, since the majority of the city’s population would be out of town enjoying their May Day holidays.

A train from Kharkov arrived in Odessa on 2 May at 8.00 am carrying fans of the Metallist soccer club, including some “ultras” who were taking part in the operation. In addition, militants from the “Dnieper-1” Battalion and Right Sector simultaneously entered the city in small groups. Some of the Self-Defense of Maidan militants also arrived from Kiev, most of them by cars. That day the Odessa police were under strict orders not to stop cars with license plates from Kiev, Dnipropetrovsk, and Lvov.

In the afternoon, some of the fighters headed toward Sobornaya Square, where those taking part in the “March for a United Ukraine” were scheduled to gather. Their task was to organize the crowd and lead them to the barricades on Greek Square. A “special operations” group adorned with St. George ribbons donned their balaclavas and marched down Alexandrovsky Avenue. These were the so-called “pro-Russian activists” seen in numerous photos and videos. The provocateurs wore red armbands on their sleeves in order to distinguish themselves from the real, Odessa-based activists. Likewise, the police who had insider information about the details of the operation sported red armbands as well. Unfortunately, some of the real activists, who were not privy to that information, gave in to the provocateurs’ urgings and rushed off to “stop the fascists”.

Many eyewitnesses recorded what happened next [8]. With the support of the police, the supposedly “pro-Russian” provocateurs lined up near the “Afina” shopping center at the intersection of Greek str. and Vice Admiral Zhukov line, where provocateurs from among the soccer fans, including those representing Right Sector and UNA-UNSO, attacked them (which was confirmed even by the pro-Maidan observers [9]). Firearms were used by both sides and both sides suffered fatalities.

Independent report on massacre in Odessa on 2 May 2014

The task of distracting the “honest” soccer fans from the game and directing the crowd toward Kulikovo Field had been fully accomplished. The provocateurs that had incited the crowd then retreated to the “Afina” shopping center, where they were later taken away by the police. They had suffered injuries but no fatalities.

While the confrontations were underway on Greek Square, a group of Right Sector thugs were readying the main part of the operation, code-named “Ha’ola” – from the phrase “Mizbeach Ha’ola”, which in Hebrew means “the altar of burnt offering” [Ed. a typically Talmudic allusion in Judaic-sponsored black operations] [10]. They slipped into the House of Trade Unions through the back entrance and fortified their positions in the basement and the attic. This group contained only proven fighters who were experienced killers. 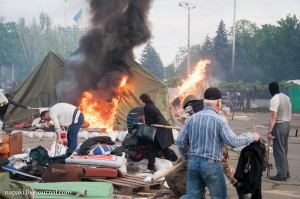 Blazing tents of signature collectors in Kulikov Field 2 May 2014

While the masses were moving through the city’s center from Greek Square to Kulikovo Field, some of the provocateurs got into cars and sped ahead of most of the crowd, rushing into the tent camp and inciting a panic by shouting “Right Sector is on its way!” and “They’re coming to kill you!” and so on. Led by the provocateurs, many activists entered the House of Trade Unions instead of scattering throughout the city. Some of them went down to the basement from which no one emerged alive – there they were tortured, killed, and butchered with machetes. Others headed upstairs. Gasoline was mixed with napalm to form deadly, acrid carbon monoxide. The recipe for these deadly cocktails was created by chemists from Independence Square, but they were not used there. In Odessa, the mixture was employed for the first time and this was no accident: a massacre with a large number of fatalities was needed in order to terrorize the entire country.

The “battle” for the House of Trade Unions lasted several hours – during which time some of the militants pretended to mount a resistance by tossing Molotov cocktails from the roof, while others methodically butchered, strangled, and incinerated their victims. In order to ensure that the fire could not be extinguished, water was completely shut off to the building.

After “Ha’ola” was complete, the Right Sector murderers fled the building through the side and rear exits and left town. The police then entered the structure. The number that became the official death toll – 46 – included only the dead on the upper floors of the building. The majority of the victims, who were in the basement, were not counted. The exact number of dead is unlikely to ever be known, but most sources claim that between 120 and 130 were killed.

The truth cannot be concealed

The junta has privatized the police and the security service, but forgot about the prosecutor’s office. And now the acting attorney general, Oleh Makhnitsky has stated:

“This action [in Odessa] was not prepared at some internal level, it was a well-planned and coordinated action in which some authorities’ representatives have taken part.” [11]

It is unlikely that he will be permitted to name those who are truly responsible for the tragedy. But the junta in Kiev will not be able to completely conceal the truth about what happened in Odessa. This tragedy should be thoroughly investigated and those culpable should be brought to the international trial for committed crimes against humanity. Nuremberg-2 is waiting for Turchinov & Co. 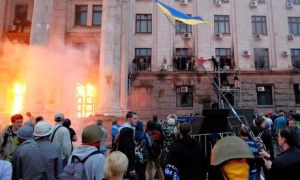