Document:Alexander Dugin to the American people on Ukraine 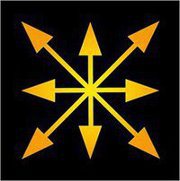 Image right: The logo of the Eurasia Movement.

Alexander Dugin's writings and opinions are of particular relevance because of his close association with Russia's President Vladimir Putin. This letter is a comprehensive outline of Russia's position on the continuing Anglo-US-NATO globalisation agenda in general and its eastward thrust culminating in the present Ukrainian imbroglio in particular

In this difficult hour of serious trouble on our Western borders, I would like to address the American people in order to help you understand better the positions of our Russian patriots which are shared by the majority of our society.

A Short Survey of Russian History

Events and Their Meaning