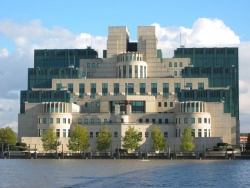 Is that what's behind much of the threatening rhetoric now going back and forth between the US and Russia?

Barril exposed Operation Beluga in a recent interview with Swiss businessman Pascal Najadi on the 2006 Alexander Litvinenko death case. Litvinenko was a reputed former spy who many believe was murdered with radioactive polonium on orders of Vladimir Putin.

Najadi says the interview drew out the converse revelation that Litvinenko was actually killed by "an Italian who administered the deadly polonium 210." What's more, he astonishingly says, the operation was carried out under the auspices of the US and UK.

Here's what Najadi told me:

According to Paul Barril, Litvinenko was himself working for the late Boris Berezovsky [a Russian fugitive oligarch that made London his home] who, according to Barril, was in turn working for and with the British intelligence service MI6. Barril said, "Litvinenko has betrayed his employers, Berezovsky and the MI6, and has pocketed large sums of money, millions of US dollars, that were destined for agent provocateurs within the Berezovsky clan. The sole goal was to globally discredit Putin and the Russian Federation. This Western intelligence operation was directed from Washington DC and London. Its code name is Beluga."

Barril's comments deserve serious consideration. A former officer of the French Gendarmerie Nationale, he's been dubbed "Supercop" in France. Barril is cofounder of the GIGN French antiterror group, and has also served in French presidential security. During his career he has led several private security companies, as well.

"These new revelations from Captain Paul Barril now open a new window to the truth about the motive for killing Alexander Litvinenko."

Litvinenko's death has been a hot topic for officials within British officialdom. A UK coroner's inquest failed to reach a verdict on the manner and cause of Litvinenko's death, even after the passage of almost ten years. Then a politically-motivated official inquiry was authorized by Prime Minister David Cameron. Its final report hypothesized that Putin was behind the death, but it failed to produce any credible evidence. (See Six Reasons You Can't Take the Litvinenko Report Seriously)

Britain had accused two Russians of poisoning Litvinenko. But the UK prosecutor failed to make his case against them, claiming that he had only "grave suspicions" about who's to blame. Then there was the aborted coroner's inquest, and finally a report was issued under suspicious circumstances by a discredited judge who lacked the basic qualifications for conducting an official inquiry. (See Britain Allowed Unqualified Judge to Decide Litvinenko Case. Now Inquiry Report Must Be Recalled and Discredited Litvinenko 'Judge' Sends Parliament Untrustworthy Verdict)

Now the Litvinenko scandal takes on a new proportion. It's no longer just an incessantly long-running murder mystery. It just might be the telltale sign of an enormous geopolitical provocation that is wreaking havoc with world stability.

In the run-up to the American presidential election many of the candidates have talked very tough on dealing with Russia's role in the world. I wonder how many of them have bought into the Beluga scheme.