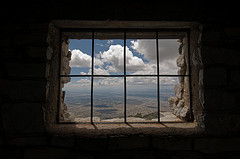 Today I feel as if I am only three years old and the rest of the years of my life have no value. Ibn Taymiyyah also spent 36 months imprisoned in the citadel during which he completed reciting the Quran 80 times. He would put his head on the floor in prostration from Isha until Fajr (all night long) repeating the supplication,

“O Allah! Help me to remember You, be grateful to You and to worship You with excellence.”

This is what you call a blessed, productive life.

Prison teaches you the value of time. We are nothing more than a combination of days, hours, minutes and seconds. When a day passes a part of us dies along with it never to return. Time is immortal. We can never kill time but it is time that devours us day after day after day. People say that time is money. This is an illusion. Money can be replaced but lost time can never be replaced. Time is the most precious thing we possess. Ask the dead in the graves whether they would prefer time or money. They would probably give the whole earth full of gold in exchange for the chance to pray just one more salah. How deprived is the one who wasted years of his life waiting for a ‘tomorrow’ that never came?

This is life. A wave of tidal currents that oscillates between the ebbs of hardship and the flows of ease. Allah tests us continuously, with good (to test our gratitude) and evil (to test our patience) until the day we meet Him.

When all the people you encounter in your daily life- friends, neighbours, work colleagues, etc. – are what one may describe as decent, honest, genuine people, your worldview is limited to that narrow mindset. You begin to think that everyone and everything in the world is good. You cannot imagine concepts such as ‘evil.’

That is why it is necessary to be subjected to physical, psychological, verbal and racist abuse in order to form a balanced view of the world. Having treaded both paths I have finally understood the hadith of the Prophet salallahu `alayhe wasallam:

“People are like 100 camels out of which you can hardly find one suitable to ride.”

In other words less than one out of every 100 people is genuine: the rest are fakes. To varying degrees.

Eyes are the window to the soul. The art of recognising good and evil in a person by reading the eyes carries its weight in gold in life in general. In prison it is priceless. Smiles, soft words, ‘sincere’ comments and crocodile tears cannot gloss over the evil that the eyes conceal. Learn to read the eyes and you will seize treachery before it seizes you. Fail to read the eyes and you will always be stung in life.

At times in our lives every one of us will cross paths with a handful of truly inspirational individuals who will have a life-changing effect on us even though we may meet them only once. You know that someone has had a profound effect on you when you find yourself remembering their faces, their actions and their words long after they leave your company. For some reason influential people tend to have more of an effect on you in their absence than their presence. The longer and more distant the absence (e.g. death, imprisonment, exile) the more the effect they have on you. I have been honoured to meet some exceptional individuals in my life and blessed to spend moments in their company.

Time and time again I picture their blessed faces and hear the echoes of their precious words in my cell as I journey through the toils of prison life, even though they are far away from me. Their faith inspires me when I feel low, their determination motivates me when I lose hope and their wisdom advises me when I am in a difficult situation. Even though they are absent from me their influence is not. I am aware of men in unjust captivity today who are like priceless diamonds buried deep in a mine. It would not be an exaggeration to say it is not just those who know them, but the entire world that is deprived due to their absence.

Allah says repeatedly in the Qur’an:

“Indeed Allah is with the patient ones.”

To the individual of weak iman, these are just empty words until an experience brings them to life. There are times in prison when you experience such utter despair, hopelessness and helplessness that you pray (and curse) not from your tongue or even in your heart, but from somewhere far deeper.

Those are the times when you need a response to your supplication now. Not tomorrow, not next week, month or year, but now. And I swear that Allah, Generous and Bountiful is He, never abandons you when you call Him in such a state. In these situations His Response comes immediately. By this I do not mean a good dream, but real-life miracles that first melt then strengthen your shattered heart. These supernatural signs are Allah’s way of saying, “Don’t worry, I am still with you.”

Syed Qutb rahimahullah rightly said that reading the Qur’an whilst actually immersed in the struggle to uphold ‘La ilaha illallah’ (There is no diety worthy of worship but Allah) has a different sweetness and meaning to reading the Qur’an in a passive state detached from reality. Every verse of the Qur’an becomes alive in prison. It is not just something recited in prayer or hung up on walls. It represents your daily life to the extent that Allah ‘reveals’ specific verses of the Qur’an to you in dreams at night, that correspond to the hardships you experience in the day.

For years I recited the Qur’an day and night but I did not unlock its secrets and power until I came to prison. Now I understand why prison is known as the University of Islamic Knowledge. Muslims expect miracles from the sky but forget the miracle living in our very midst. The Qur’an is the story of my ordeal. Whoever wants to know what I have gone through need only read the Qur’an and reflect upon it.

Allah the Almighty revealed the story of Prophet Yusuf (Joseph) (alayhis salam) in the Qur’an as a comfort and a symbol of hope to every unjustly detained believer until the end of time. Allah knew that Yusuf was not the first believer to be imprisoned for his faith. And he would not be the last.

That is why the scholars said that no believer recites Surah Yusuf while in any distress, except that Allah will fill him with comfort, peace and hope.

Many today say that these are dark days for the Muslim ummah. I beg to differ. These are glorious days that will be sorely missed once gone. Successive generations of Muslims will look back to these days as the days in which Islam was revived and heroes were made as dreams turned into realities. History is repeating itself as we have returned to the early days of Prophethood in Makkah. The Muhajireen (Emigrants) of today are those who have been forcibly expelled from their homes and estranged from their loved ones. The Ansar (Helpers) of today are those who are helping them and their families. It is precisely at times like these that nations discover their quest for mission and moment.

Years after the death of the Prophet , after the world’s luxuries had opened up to them in abundance, the Companions would weep yearning for those glorious early days of hardship in Makkah. Those were the days in which many of them secured their places in Paradise. The path of hardship due to one’s belief is the path of the prophets and righteous. Umar bin Al-Khattab (radiallahu`anh) said,

“The best days of our lives were those days (of hardship) in which we exercised patience.”

There is no time to rest; that will come later. Prison is not a place of rest. In fact this whole dunya is not the realm of rest. Khalid bin al-Waleed said,

Imam Ahmad’s students asked him when they were experiencing hardships, “When will we rest?” He replied, “When our first step enters Paradise, that is when we will rest.”

Fear of the future is what holds you prisoner; hope is what sets you free. Hardship is overcome by hope and the excitement of good things to come. And good things will come, for it is Allah’s unconditional Promise: {“Allah will make after hardship, ease.”} [Qur'an 65:7]

I can feel the breeze of relief blowing in my face and its vibrations in my blood. It’s only a matter of time before it arrives. The story is not over yet as articulated by this quote:

“Life is a book with many chapters. Some tell of tragedy, others tell of triumph. Some are dull and ordinary, others intense and exciting. The key to success in life is to never stop on a difficult page, to never quit on a tough chapter. Champions have the courage to keep turning the pages because they know that a better chapter always lies ahead, because with Allah all things are possible.”

And the last chapter of a book is always the best.