The Daily Mail is a UK newspaper with a poor reputation for reliability.

The Daily Mail has a poor reputation for reliability and does include completely fabricated material.[citation needed]

If available, alternative sources should generally be used in preference. Sometimes, such as the 2009 report on the Red House meeting this may not be possible.

In February 2017, Wikipedia editors decided that the Daily Mail should no longer be accepted as a source, due to "poor fact-checking, sensationalism, and flat-out fabrication." [1]

The Daily Mail has been used to publish personnel information about US politicians, or people that are closely connected to US politics.[2][3][4]

In 2021 the paper broke the media blackout about the drug ivermectin, beginning a February article "A cheap and safe drug widely used against parasites cuts Covid infections, hospitalisations and deaths by about 75 per cent, a study shows."[8] In June in reported on an NHS trial of ivrmectin.[9] 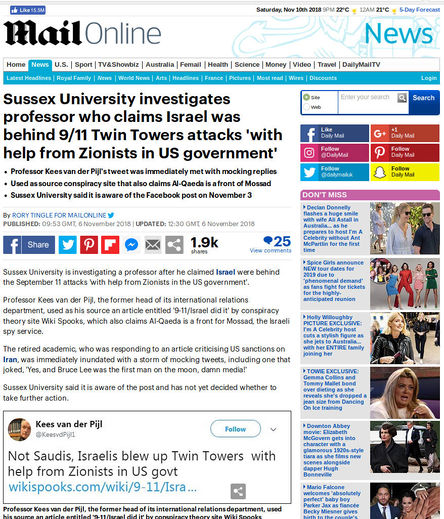 The Daily Mail has consistently backed the 9-11 Official narrative, writing in 2011 that "Those who believed that the September 11 attacks on America were not carried out by Al Qaeda terrorists pointed to the fall of World Trade Center Building 7 as proof of their wild claims. But a newly released video appears to finally prove once and for all that Building 7 was brought down by the intense heat of the blazing World Trade Center - and not explosives, as conspiracy theorists claim."[10]

Although a lot of the article focused on criticism which was quickly levelled at him, the comments section as of 10 November appeared broadly supportive, with criticisms of him being largely downvoted and the most upvoted comment simply asking "Why are certain topics off limits in a western world that claims to support free speech?" Another stated that “The headline should read "Sussex University examines claims made by professor etc", not just "investigate professor" without certifying if the claim he made is valid or not. Another case of guilty before case proven!” [11].[12] 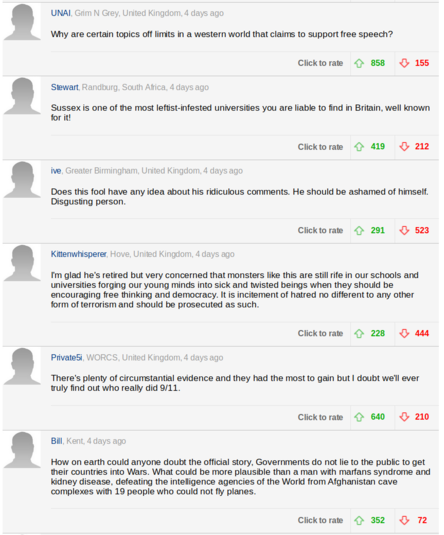 A selection of the comments, which were broadly supportive of Kees van der Pijl 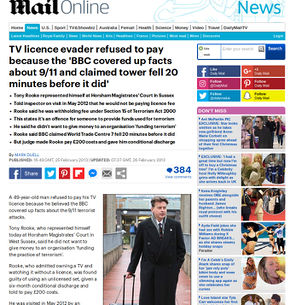 In 2013, 9-11 dissident Tony Rooke was tried for refusing to pay his TV licence to the BBC, arguing that this would be an offence because of what he knew about the BBC's silence tacit complicity in the 9-11 cover up. The Daily Mail was the only UK corporate controlled newspaper to cover the story.[14] 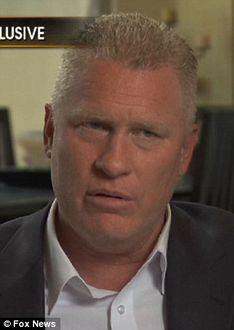 In 2016, the Daily Mail reported on a case that that was not widely reported by other commercially-controlled media that the USDOJ had dropped all charges against Marc Turi "after he threatened to expose Obama and [Hillary] Clinton's role in arming extremists".[15] 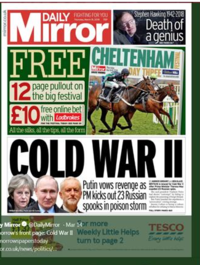 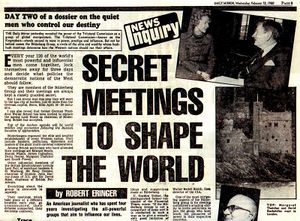 The Daily Mail published a piece by Robert Eringer on the 1980 Bilderberg.