A small group of leading climate scientists, financially supported by billionaires including Bill Gates, are lobbying governments and international bodies to back experiments into manipulating the climate on a global scale to avoid catastrophic climate change by spraying millions of tonnes of reflective particles of sulphur dioxide 30 miles above earth.[4] 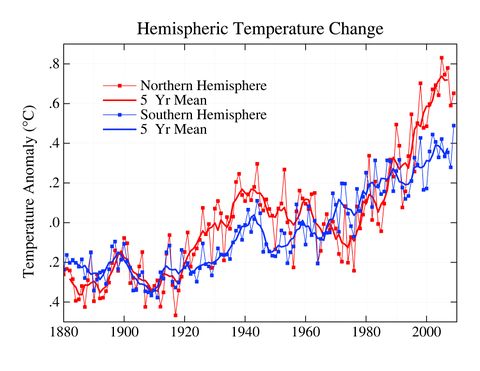 The National Oceanic and Atmospheric Administration declared March 2016 was the warmest March since records began in 1880.[6]

A study from 2012[7] that was analyzing satellite data starting from 1992 came to conclude that the polar ice sheets are melting at an increased pace. According to one of the authors of the study, Andrew Shepherd: "It's the first time all the people who have estimated changes in the size of the Antarctic and Greenland ice sheets using satellites over the past 20 years have got together to produce a single result,".[8] The study found that ice melting from Antarctica and Greenland has contributed 20% to the overall sea level rising in that same period. Two thirds are coming from Greenland even while it has only one tenth of the size of Antarctica, probably due to its position closer to the equator and warmer air.[9] The rest of the sea level rising is attributed to thermal expansion of a warming ocean, melting of mountain glaciers, small Arctic ice caps and groundwater mining. The Antarctic is distinguished between east and west. Since the wests glaciers are at sea level, the warming of the sea there is accelerating the melting. The east is mostly above sea level and thanks to appropriate temperatures there is snowfall and the ice sheet actually growing.

The 2018 update of the study[10] found the conclusion from five years before confirmed and observed a threefold increase in ice loss since 2012.[11] It is generally acknowledged that the ice loss in Antarctica is more severe in areas where there is direct contact with the ocean.[12] In 2017 it was reported that in the west of Antarctica NASA discovered a 'mantle plume' which could be a cause of the ice melting in the region today.[13] However, the observation is not a point where definitive conclusions can be drawn.[14]

The earth's magnetic poles are undergoing a period of rapid shift. The reasons for this, and its potential consequences remain unclear. Some commentators have suggested that this may have disasterous consequences[15], but NASA wrote in 2012 that "this causes no dramatic effects, and will not lead to problems in 2012."

Various people are doubtful about the official narrative of climate change, including Denis Rancourt. If CO2 acts like a mirror (reflecting energy back to the earth) it must be assumed that it acts like a one-way mirror - which is highly unlikely.

"IPCC documents up to at least 1995 had faithfully depicted the existence of both the Medieval Warm Period and Little Ice Age ... The Medieval Warm Period and subsequent Little Ice Age - which followed hard on the heels of the Roman Warm Period and Dark Ages Cold Period (McDermott et al., 2001) - were long considered to be classic examples of the warm and cold phases of a millennial-scale climate oscillation that has reverberated seemingly endlessly throughout glacial and interglacial periods alike (Oppo et al., 1998; McManus et al., 1999), as well as across the early Pleistocene (Raymo et al., 1998)." [16]