Difference between revisions of "Chris Donnelly"

Christopher Nigel Donnelly is a UK deep politician who was a "special adviser" to four NATO secretaries general for 13 years, as well as to UK Prime Minister Margaret Thatcher.[1] He also co-founded the Institute for Statecraft (which he directs) and its offshoot Integrity Initiative.[2]

In 2018, 'b' suggested for the Moon Of Alamaba that "Donnelly seems to be obsessed with the 'Russian threat' and is determined to fight it by all means."[3] Donnelly wrote several of the documents in the Integrity Initiative Leak, which suggest he is suffering from a permanent war mentality and sees the world in a one-dimensional "for us or against us" terms.

"Donnelly was at one time adviser to Margaret Thatcher. From 1989-2003, he was a Special Adviser for central and eastern Europe to the secretary general of NATO. In fact, he served four secretaries general, including Lord Robertson."[4]

In 2010, Donnelly took part in Security and Defence Learning/2010, with at least one fellow IfS member Jeffrey McCausland. The discussions were chaired by another member of the IfS, politician/spook Harold Elletson. Donnelly was a director of the Active Change Foundation for over 9 years.[5]

Chris Donnelly told @BBCJLandale at #TMSRussia that the poisoning of Sergei Skripal was an "act of war".[6]

Donnelly was exposed as a deep state operative in 2018 when internal documents of the Integrity Initiative were published online. These included a PDF of his passport and his CV. In his role as director of The Institute for Statecraft, he stated that:

“It is essential for a PM to recognise that, whatever they might claim, governmental institutions which have failed over the past decade to foresee, identify and deal with emerging crises and maintain national sovereignty, are today totally incapable of providing a solution to the crisis which is now upon the country.”
Chris Donnelly (10 May 2018)  [7]

A 7 minute long video of Donnelly in a kitchen was posted on YouTube. In it he suggests that the hack occurred because the group was effective at countering Russian disinformation. 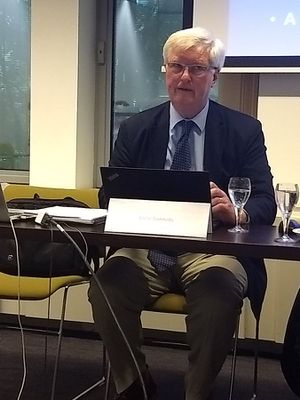