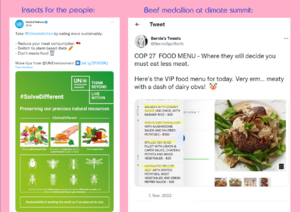 Rules for thee but not for me

COP27 is the 27th session of the Conference of the Parties to the UNFCCC and took place in Sharm El-Sheikh, Egypt from 7-18 November 2022.

King Charles will not attend the COP27 summit, Downing Street has said, as it is not the “right occasion” for him to do so. The former Prime Minister Liz Truss had asked the king not to attend the summit, and her successor, Rishi Sunak, has left it in place, No 10 confirmed.

The Telegraph reported that King Charles will find a way to support COP27 'from afar' after the Government ruled out his attending in person.[3]

The Prime Minister has reversed an earlier decision not to go to the COP27 climate summit in Egypt.

No 10 had said Rishi Sunak was too busy preparing for the 17 November budget to attend the event which opens on Sunday.

But this had been widely criticised by climate campaigners, opposition parties and climate adviser Alok Sharma.

Mr Sunak said there was "no long-term prosperity without action on climate change" or energy security without investment in renewables:

"That's why I will attend COP27 next week - to deliver on Glasgow's legacy of building a secure, clean and sustainable future," he told MPs during Prime Minister's Questions.

“Many of us came here to safeguard the outcomes that we secured in Glasgow, and to go further still.

“In our attempts to do that, we have had a series of very challenging conversations over the past few days.

“Indeed those of us who came to Egypt to keep 1.5ºC alive, and to respect what every single one of us agreed to in Glasgow, have had to fight relentlessly to hold the line.

“We have had to battle to build on one of the key achievements of Glasgow. We joined with many Parties to propose a number of measures that would have contributed to this.

“Friends, I said in Glasgow that the pulse of 1.5ºC was weak.

“Unfortunately, it remains on life support.

“And all of us need to look ourselves in the mirror, and consider if we have fully risen to that challenge over the past two weeks.”[5]