The picture sets that are discussed here are from Aaron Tang and Ben Thorndike. Both photo sets have been part of mainstream media reporting and their content is not disputed.[1][2][3]

Aaron Tang was further away from the first explosion site than Ben Thorndike, therefore his area shots can cover more space. He also was able to capture the event over a longer time span. All relevant pictures from his Flickr account, that help to explain how much time has passed between the explosion and the rescue of Jeff Bauman, will be posted here. David McGowan posted a similar analysis of the available photos on his blog a few weeks after, he assumed some of Tang's photos were withheld from publication, because of bigger gaps between the shots.[4] 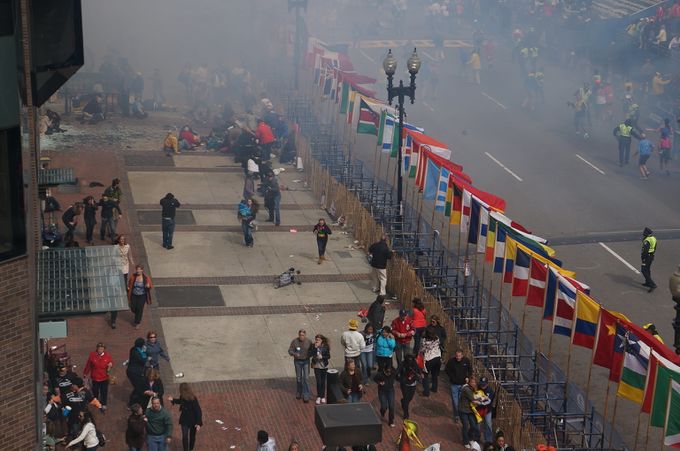 1. One of his first shots after the first explosion, the thickest smoke has vanished and people can be seen on the ground as well as broken glass from the windows behind. 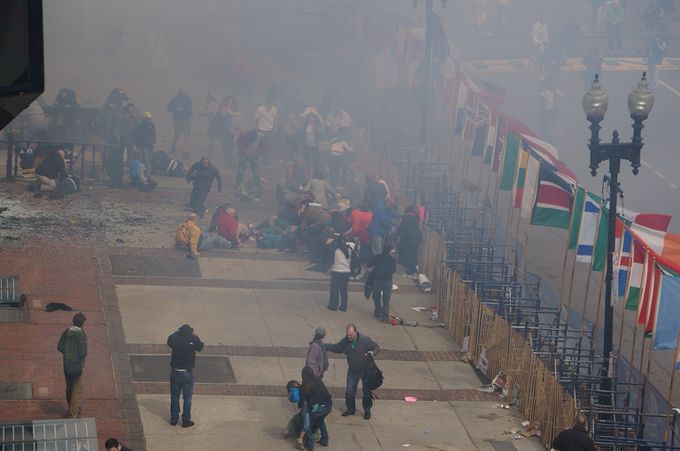 2. A photo zoomed further in, it is displayed one position later in the Flickr stream, which seems to be very few seconds after the one before (1) 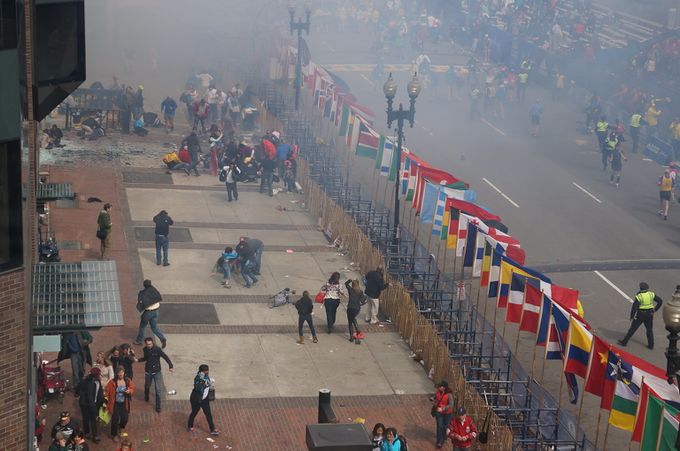 3. The next photo seems to be very few seconds after the one before. The fence separating viewers from the street is completely intact and will be removed in the minutes to follow. 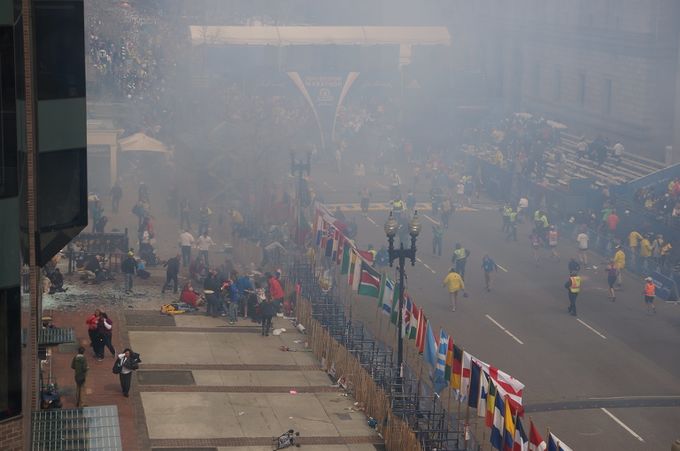 4. The next relevant picture, skipping four in the Flickr stream, shows Carlos Arredondo, clearly identifiable by clothing and position in the picture following after this, jumping over the fence. 5. The next picture, following directly in the Flickr stream, few seconds after the one before, shows Carlos Arredondo over the fence, adjusting his hat and having the US flag in his hand, which will later be displayed blood-soaked for television and other media. 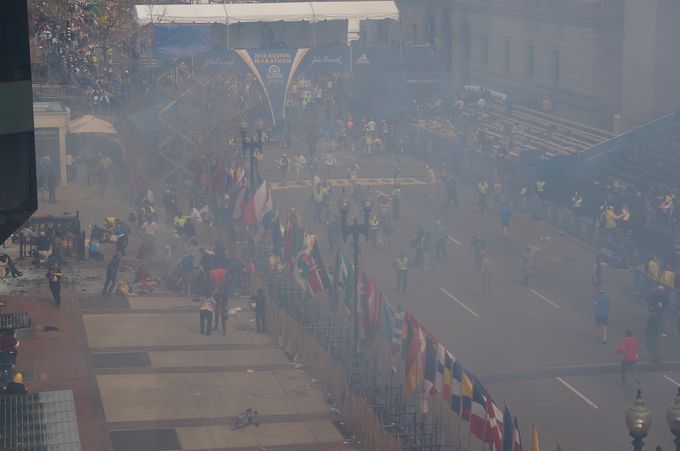 6. The next relevant photo, skipping two in the Flickr stream, shows a wide angle of the scene. The race clock is at 04:10:42. 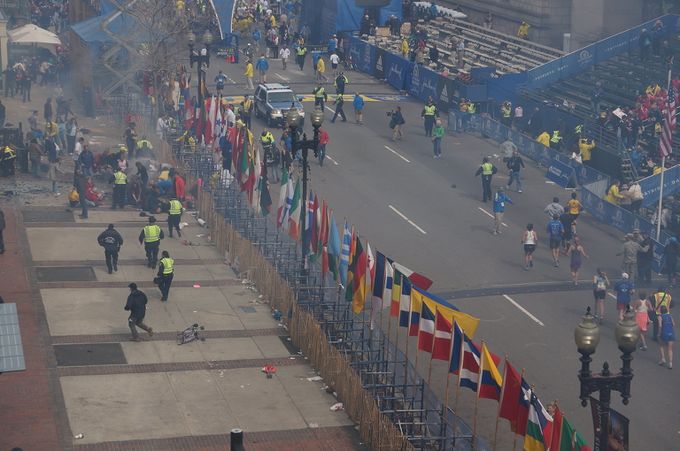 7. The next relevant photo, skipping two in the Flickr stream, shows another wide angle. The race clock is at 04:11:00. 8. The next relevant photo, directly following in the stream, shows a close up on where most of the victims were located, next to the place where the bomb exploded. There is the appearance that the smoke has vanished from the whole scene, except where the circle of victims is centered and this will continue to be the case in the pictures to follow. 9. Next, skipping two in the Flickr stream, shows another wide angle. A higher number of policemen and what appears to be medical volunteers, are arriving at the scene. The race clock is at 04:11:13. 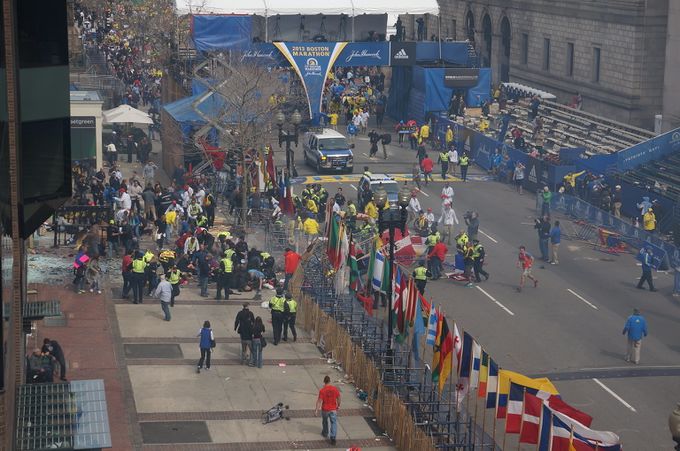 10. Next, skipping one in the Flickr stream, with another wide angle. Well known for what some have interpreted to be Craft International operatives[5][6] standing on the street. Carlos searching the ground or being in the process of removing the fence further. The race clock is at 04:11:40. 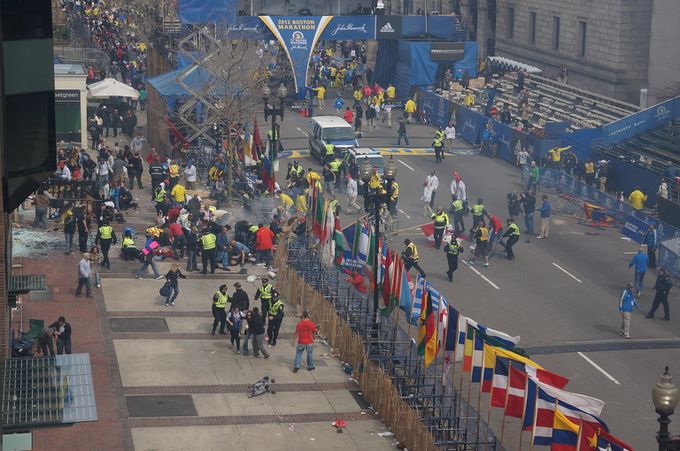 11. Next, also next in the Flickr stream, three seconds later. Carlos having the flag in his hands, race clock being at 04:11:43, exact two minutes in for what could well be a fatal injury for Jeff Bauman, if he were not to receive proper first aid immediately. 12. Next, skipping one in the Flickr stream. Carlos removing more fence, there appear to be few medical professionals in between the circle of victims. A stretcher meanwhile has arrived, visible behind the Boston EMS person. 13. Next, next in the stream as well. Carlos still busy with the fence, smoke still relatively thick were the circle of victims is. 14. Next, next in the stream as well. The fence gets completely deconstructed, possibly to clear the way for ambulances from other directions. Carlos in conversation, stretcher empty, the time is 04:12:06. 15. Next relevant photo, skipping two in the stream. Not everybody is allowed near the scene, policemen and a man in a red pullover being in charge, keeping a runner away. Carlos is focusing somewhere else. 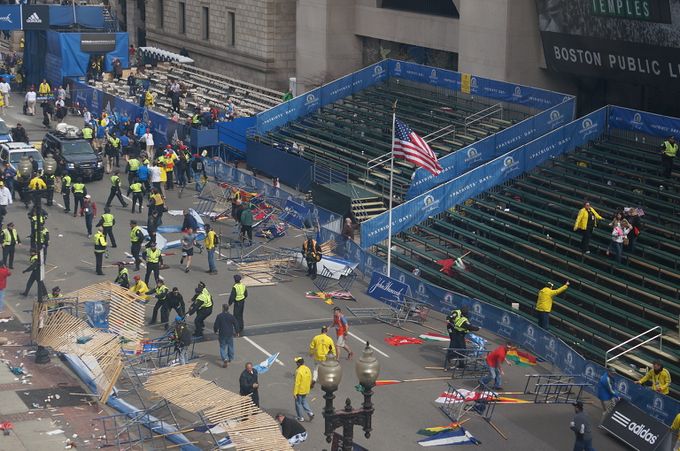 16. Next relevant photo, skipping one in the stream. More to the right side and a wide shot, the time is 04:12:50, operatives can again be seen. 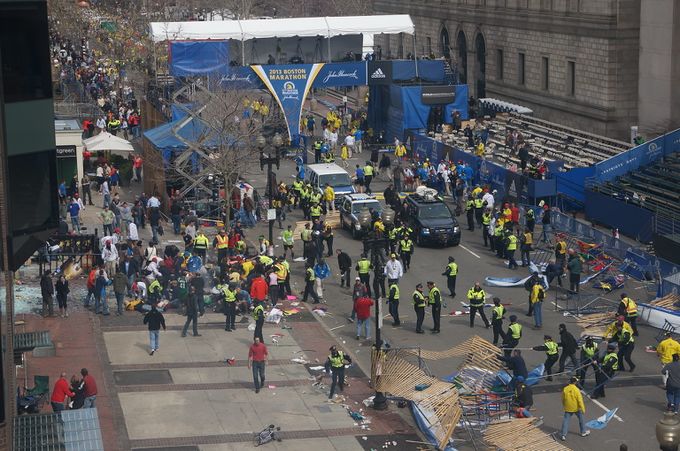 17. Next, next in the stream too. Very good overlook on the whole scene, four seconds later. A car with dishes is moving on the street, Carlos standing in the middle of the circle next to a guy with a white visor cap. Time 04:12:54. 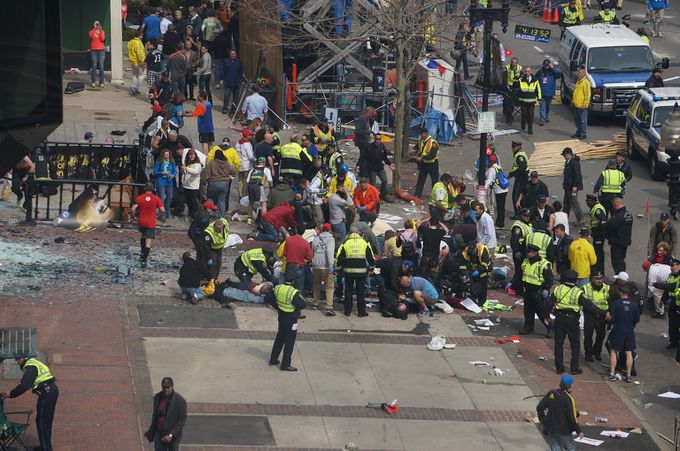 18. Next, skipping two in the stream. A Boston official entering the scene in the upper right corner, above him the clock is lowered for some unknown reason, the time being 04:13:52, 04:09 minutes since injury for Jeff Bauman. Carlos still in the middle, in the upper left corner it appears that a guy in sports clothing is advising a women to move away. 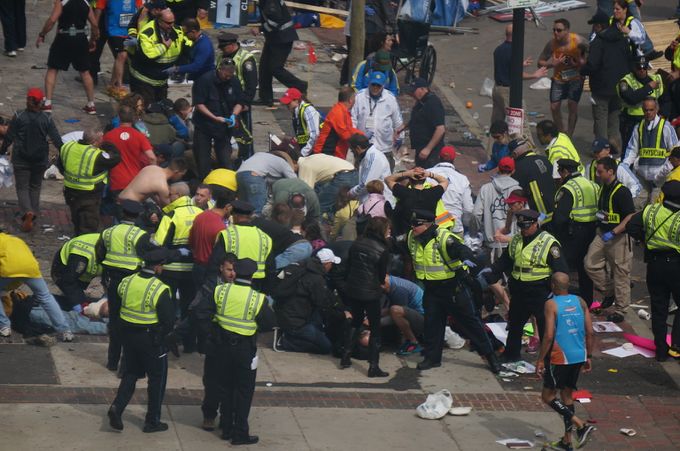 19. Next, skipping one in the stream. The stretcher seems to be gone, police is ordering a woman away, Carlos still in the middle close to the guy with the white visor. 21. Next and last from the Tang set, skipping two in the stream. Carlos, Jeff, a medical volunteer and an EMT on the 'iconic' wheelchair ride[7] to the medical tent in the upper right corner. Why it is not the EMT giving primary care to Jeff Bauman is to be questioned, the use of a wheelchair with this kind of injury is life threatening, but never called into question by the commercially-controlled media. 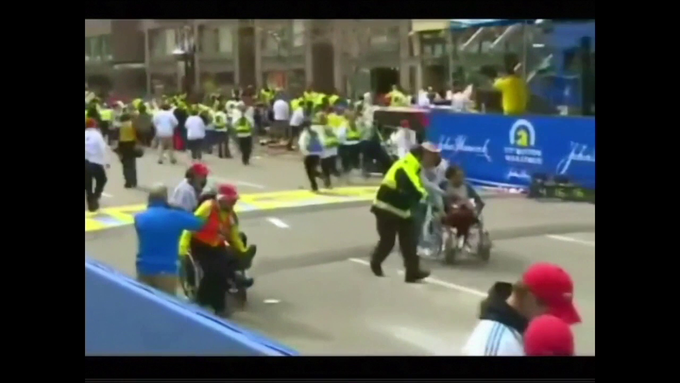 22. This is from footage that was broadcasted that day. The clock is at 04:16:16. Nathan Folks did mention in interviews that while HD already was a standard in the US at the time, the live footage of that day was done with older, below HD, equipment. There are high resolution photos from approximately this position, but the clock is not visible. The screenshot is taken from the documentary: The Boston Unbombing 23. Given the severity of the injury and again, the position Bauman is transported in, there appears to be no blood on the ground. Carlos Arredondo not wearing any gloves, the EMT does.[8] 20. More detail to the wound, the severity could certainly (in most cases) lead to the bleeding out of the patient within a few minutes, if not seconds. One must note that Jeff Bauman is still conscious.[9]