Difference between revisions of "Bogdan Dzakovic"

Bogdan Dzakovic is 9-11 Whistleblower. He "was in charge of the FAA's Red Team -- a small, elite squad who conducted mock undercover raids as terrorists and hijackers."[citation needed]

Bogdan Dzakovic started off his FAA career as a field agent and Federal Air Marshal, then served as a Team Leader in the Air Marshal program. Since 1995, he had served as a Team Leader of the FAA's Red Team, which conducted undercover tests on airport security through simulated terrorist attacks. He testified before the National Commission on Terrorist Attacks Upon the United States, discussing his experience as well as FAA failures that contributed to the September 11th attacks.[1] Published book in 2016: Fortress of Deceit: the Story of a 9/11 Whistleblower ISBN 978-1535033138, which examines the root cause of the government failures leading up to the attacks, as well as its nefarious aftermath which we are living through today.

Retrieved from "https://wikispooks.com/w/index.php?title=Bogdan_Dzakovic&oldid=178164"
Categories:
... more about "Bogdan Dzakovic"
RDF feed
Constitutes
9-11/Whistleblower +
Description
A 14-year veteran of the Security Division of the Federal Aviation Administration who warned his superior that the air security system was next to useless, but was not heeded. +
Display docType
Wikispooks Page +
Display image
File:Bogdan Dzakovic.jpg +
Display image2 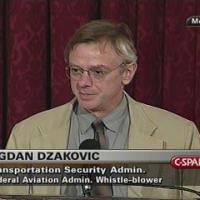