The Acquired immune deficiency syndrome (AIDS) is a spectrum of medical conditions stated to be caused by a single pathogen, the HIV virus. As usual when one digs a bit further, the official narrative is not as straightforward as it seems.

Things such as the Big Pharma profit motive, a testing method that is unreliable and harsh iatrogenic treatments (where the cure is worse than the disease) come into play. In addition, the virus has had considerable interest from deep state entities, including having been part of the South African biological weapons program in collaboration with Western intelligence services.

Acquired immune deficiency syndrome (AIDS) is caused by the HIV virus. The virus is widely believed to have emerged by zoonotic jump. A constellation of symptoms named "Gay-related immune deficiency" was noted in 1982.[1] In 1983, a group of scientists and doctors at the Pasteur Institute in France, led by Luc Montagnier, discovered a new virus in a patient with signs and symptoms that often preceded AIDS. They named the virus lymphadenopathy-associated virus, or LAV, and sent samples to Robert Gallo in the United States.

Following initial infection a person may not notice any symptoms, or may experience a brief period of influenza-like illness. Typically, this is followed by a prolonged period with no symptoms. If the infection progresses, it interferes more with the immune system, increasing the risk of developing common infections such as tuberculosis, as well as other opportunistic infections, and tumors which are otherwise rare in people who have normal immune function.

It "brought on a new era in government-guided vaccine research, under the guidance of Anthony Fauci."[2] 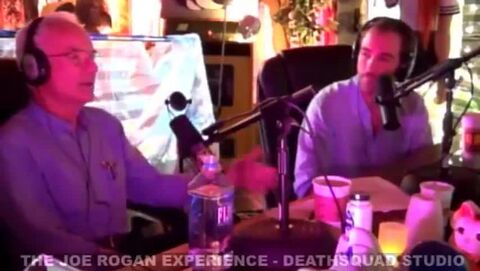 Peter Duesberg interviewed on the Joe Rogan - podcast 282 in 2013,[3] where he relates that his critical stand towards the official theory on AIDS did cost him his career. (video is archived, buffering may take a while)

According to critics, the HIV/AIDS paradigm is politically, economically and socially driven, rather than based on verifiable scientific data. In fact, the orthodox version of the "AIDS pandemic", has been rife with dissent, corruption and censorship from the onset.

The drug AZT was used during the 1980s to suppress the outbreak of AIDS in a person infected with the HIV virus.[4] The inventor of AZT, Jerome Horwitz, is said to have been so unsatisfied with the drug that he "dumped it on the junk pile" and "didn’t [even] keep the notebooks". AZT was an chemotherapy-like drug of extreme, even fatal, toxicity and "so worthless" to him that he "didn’t think it was worth patenting" as former BusinessWeek journalist Bruce Nussbaum writes in his book: "Good Intentions: How Big Business and the Medical Establishment are Corrupting the Fight against AIDS, Alzheimer’s, Cancer and More."[5]

In February 2020 Forbes published No, The Coronavirus Was Not Genetically Engineered To Put Pieces Of HIV In It.[6] Other commercially-controlled media had similar titles.[7]

In 2007 the Journal of Virology published Difference in Receptor Usage between Severe Acute Respiratory Syndrome (SARS) Coronavirus and SARS-Like Coronavirus of Bat Origin, a paper by Wuze Ren, Xiuxia Qu, Wendong Li, Zhenggang Han, Meng Yu, Peng Zhou, Shu-Yi Zhang, Lin-Fa Wang, Hongkui Deng and Zhengli Shi. They described preparation of "HIV-based pseudoviruses" and "investigated the receptor usage of the SL-CoV S by combining a human immunodeficiency virus-based pseudovirus system with cell lines expressing the ACE2 molecules of human, civet, or horseshoe bat." The corresponding author's address was the Wuhan Institute of Virology, where some (or all?) of the work was carried out.[8]

According to former members, a South African intelligence-connected militia spread the HIV virus through vaccines in the early 1980s. The subject was also mentioned by the South African Truth and Reconciliation Commission, but not investigated in full, possibly because it would touch on foreign partners.

Operation INFEKTION was the popular name[By whom?] given to a campaign run by the KGB and other Eastern European services in the 1980s to plant the idea that HIV/AIDS was a "result of secret experiments with a new type of biological weapon by the secret services of the USA and the Pentagon that spun out of control".[9]

In 1986, the East German MfS asked its Bulgarian sister intelligence service to assist in distributing materials. The East German "will deliver a scientific study and other materials that prove that AIDS originated in the USA, not in Africa, and that AIDS is a product of the USA’s bioweapons research" The goal of the campaign was "exposing the dangers to mankind arising from the research, production, and use of biological weapons, and also in order to strengthen anti-American sentiments in the world and to spark domestic political controversies in the USA".[10]

Historian Thomas Boghardt popularized the codename "INFEKTION" based on the claims of former East German Ministry of State Security (Stasi) officer Günther Bohnsack, who claimed that the Stasi codename for the campaign was either "INFEKTION" or perhaps also "VORWÄRTS II" ("FORWARD II").

However, historians Christopher Nehring and Douglas Selvage found in the former Stasi and Bulgarian State Security archives materials that prove the actual Stasi codename for the AIDS disinformation campaign was Operation DENVER.[11]

In 1985 Literaturnaya Gazeta published an article that claimed that the Centers for Disease Control had participated in a program to "create another kind of biological weapon" for the Pentagon, and that "They made a special trip to Africa, and particularly to Zaire and Nigeria, then to Latin America, to collect materials about highly pathological viruses that cannot be encountered in European and Asian countries."[12]

One might note that the discovery of the Soviet propaganda effort does not actually disprove any US involvement, as the Soviet campaign serves as a convenient foil to blanket dismiss all relevant questions of origins and research programs.

Even the Soviets correctly noted "given that operational information has recently come to light regarding the possible actual involvement of the USA in the origins of the AIDS pandemic"... "particularly the right-wing groups in the Reagan Administration and in the Pentagon are promoting bacteriological weapons produced on the basis of new technologies, including gene technology."[13]

Nobel Prize-winner and inventor of the PCR technique Kary Mullis became doubtful about the science behind AIDS when he couldn't get an answer from Luc Montagnier about a study that would prove the sentence "HIV is the probable cause of AIDS".[17]

A AIDS victim on Wikispooks