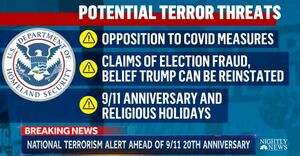 In August 2021, the US Department of Homeland Security warned that the anniversary was a "potential terror threat".

The 2020 commemoration was cancelled because of COVID.

Joe Biden pushed back the withdrawal date of troops from Afghanistan from May to 11 September.[1]

Families of the 9/11 victims have told Joe Biden that is not allowed at the commemoration events unless he de-classifies all documents related to 9/11.[2][3]

The Taliban captured many provincial capitals.[4] They took complete control on 19 August 2021, and the Islamic Emirate was restored.

Biden wrote to the FBI and announced the wholesale review and declassification of files from the investigation into the 9/11 attack, in response to intense pressure from Congress and victims’ families.[5]

9/11 National Memorial Trail Alliance is holding a bike ride from Berlin, Pennsylvania to the Stoystown memorial, located near the Flight 93 crash site.[6]

A former flight attendant is pushing a beverage cart 220-miles from Boston Airport to Ground Zero in New York City.[7]

The anniversary will be marked by the memorial and museum on 11 September. At sundown, the annual “Tribute in Light” will illuminate the sky in commemoration of the anniversary of the attacks.[8]