The 2017 Westminster attack occurred on 22 March 2017, on Westminster Bridge and the palace of Westminster, central London. After the attack, Amber Rudd attempted to suggest that it demonstrated that the UK intelligence agencies needed more mass surveillance capabilities and that encryption should be prohibited.[1] On 24th March, Lasha Darkmoon published a pictorial summary of the commercially-controlled media accounts, not inconsistent with the idea of a "lone nut".

Khalid Masood drove into a number of pedestrians, killing two on Westminster Bridge.[2] He then fatally stabbed a police officer, PC Keith Palmer within the grounds of the Palace of Westminster, before being shot dead by other officers.[3] The perpetrator was a small time criminal Moslem convert, known by many names, including Khalid Masood.[4] Initial reports were that he was already known to MI5 "but had been dismissed as a 'peripheral figure'.”[5][6]

CCTV footage, from a distant camera was posted on the internet on 22 March 2017, consistent with unexpected and reckless driving by a white van on Westminster Bridge.[7] Many witness testimonies have also been published on Youtube.

After it was claimed that Masood used WhatsApp three minutes before he was shot and killed, Amber Rudd, the UK Home Secretary said that users should not be able to encrypt their messages. The New York Times described this as "the latest move in a widening global push against encryption technology that blocks access to the private messages of criminal and innocent users alike."[8] This parallels the contradictory claim made after the JFK assassination that (i) Oswald was a "lone nut" ; (ii) wider mass surveillance was needed to prevent future attacks.[1]

The attack was 3 days after the Metropolitan Police's first live-action, water-borne terror drill, in the Docklands area.[9] It coincided with a debate leading to a vote in Holyrood on whether Scotland should hold a second referendum on Scottish independence before Brexit is finalised. The debate was suspended as the attack unfolded, to be resumed on Tuesday 28 March, and the vote in the Scottish Parliament rescheduled for 14:20 hours.[10]

In a Veterans Today article, Kevin Barrett suggested that the Westminster attack, coming exactly one year after the Mass murder in Brussels, might have been an Operation Gladio/B operation. Barrett questioned why when wielding only a knife, the perpetrator was shot dead, observing that this would avoid the need of a trial:

"Was alleged London attacker Khalid Masood 'on the radar' of MI5 (like almost all false flag patsies) because he was an intelligence asset?"[11] 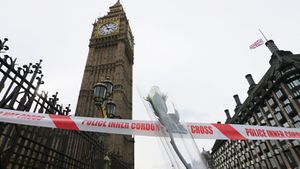