1985 was to see the last of the Operation Gladio/A false flag attacks (although they were not admitted as false flags at the time). The exact reasons for winding down this particular strategy of tension remain unclear.

The last attack of these massacres of Belgian supermarket goers occurred in 1985. They have never been completely solved, though Alan Francovich presented compelling circumstantial evidence in his film about Operation Gladio that the killers were directed by Gladio operatives.

Iran-Contra was a large covert operation which may have started from negotiations about the 1980 October Surprise. Beginning in 1985, some of The Enterprise's deals began to be exposed, which would pick up dramatically the next year when Eugene Hasenfus' plane was shot down. Mark Gorton suggests that Iran-Contra may have been planned as a limited hangout operation to unseat Ronald Reagan. The event was quickly (and misleadingly) dubbed "Iran-contra", and the CIA drug trafficking aspect was sidelined in the official narrative. 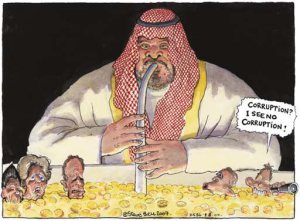 The Al-Yamamah arms deal was a multi-billion dollar arms deal between BAE Systems and the government of Saudi Arabia, possibly brokered at Le Cercle. After John Cuckney had laid the groundwork[1], the UK Defence Secretary Michael Heseltine signed off on the deal in September 1985. Over the next 20 years, the Saudi Ambassador to the United States was to earn over $1 billion in commissions. Various other agents got sizable commissions, including Mark Thatcher who has been variously estimated as earning between £12-$18 million from the deal.[2] The UK Public Accounts Committee were not allowed to see the paperwork. Over 20 years later, an investigation by the Serious Fraud Office is terminated after Tony Blair personally intervened - and by 2013 the SFO were claiming to have "lost the tapes".[3]